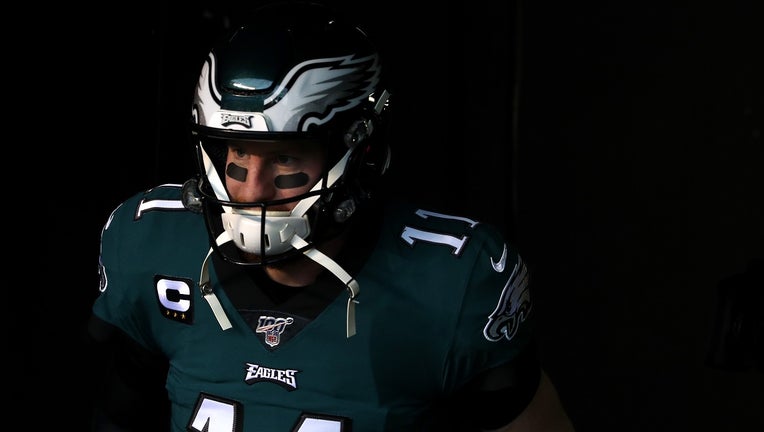 Wentz was hurt in the first quarter of the Philadelphia Eagles’ wild-card playoff game against Seattle on Sunday when he was drilled on a helmet-to-helmet hit from Seahawks defensive end Jadeveon Clowney.

Wentz stayed in the game for several plays before he was checked out in the sideline medical tent. He left for the locker room late in the quarter.

Wentz made his first career playoff start against Seattle after missing the Eagles’ Super Bowl run two years ago because of knee surgery and last year’s wild-card win due to a back injury. Wentz watched from the sideline as Nick Foles became a local legend, leading the Eagles to the franchise’s first Super Bowl title two years ago. Wentz again was a spectactor a year ago as Foles sparked an unlikely playoff berth and a wild-card victory.

Once Foles moved on to Jacksonville, the postseason was supposed to belong to Wentz.

He couldn’t even last a quarter.

The Eagles turned to 40-year-old Josh McCown, in his first career playoff game, to lead them against the Seahawks. The Eagles did not have a third active QB and could use Greg Ward Jr., a star quarterback in college at Houston before converting to wide receiver in the pros, in an emergency.

Wentz, healthy at last during the regular season, played though a patchwork set of receivers to lead the Eagles to four consecutive wins down the stretch and their second NFC East title in three seasons. Wentz started all 16 games for the second time in his four seasons and set single-season team records with 4,039 yards passing and 388 completions.

Wentz, the No. 2 overall pick in 2016, took a pair of hard hits in the back against Seattle before Clowney delivered the crushing blow. The crown of Clowney’s helmet connected with the back of Wentz’s head and drove the QB into the turf.

McCown had come out of retirement in August to join his 11th team and play his 17th season. ESPN had hired McCown to be an NFL analyst on the day he announced he was calling it quits. Just five months later, he was instead calling plays in a pinch, one more playoff game Wentz had to cede to a backup.

Russell Wilson threw a 53-yard touchdown pass to DK Metcalf, Marshawn Lynch had a rushing score and the Seahawks ultimately beat the Eagles 17-9.

"So dang proud of this team and how we battled and overcame so much this season," Wentz wrote in an Instagram post. "Not the ending we envisioned but we will all grow and be stronger because of it!"

Wentz thanked fans for their thoughts and prayers after his head injury.

"Hate not being out there to finish it out with my guys because of a play like that, but it’s the unfortunate part of this game," Wentz said. "It’s all in Gods plan, not mine! Trusting in him."

"Onward to next year," the quaterback added. "Big things comin’, believe that!"