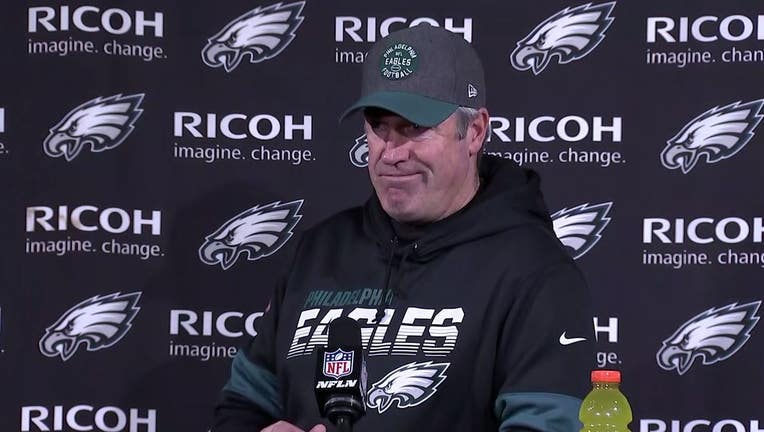 PHILADELPHIA - Carson Wentz helped the Philadelphia Eagles overcome one injury after another until he ended up on the sideline.

A season that began with Super Bowl expectations ended early because most of the players who gave Philadelphia reason to have championship hopes were injured.

Forty-year-old quarterback Josh McCown was among six backups on the field trying for the tying score in a 17-9 loss to Seattle on Sunday in the wild-card round of the NFC playoffs.

So the Eagles (9-8) cleaned out their lockers on Monday and headed off to an offseason filled with uncertainty.

The front office has important decisions to make regarding free agents and must address an aging roster. There also could be some changes on the coaching staff.

"Even with as much adversity as we faced all year, to put ourselves in this position, win the NFC East, and have a home playoff game, I was really proud of the effort all season," coach Doug Pederson said he told his players.

Wentz answered questions about his durability, started 16 games, set a franchise record with 4,039 yards passing and led a team with a group of skill players off the practice squad to four straight must-win games in December to secure the division title.

But he lasted only two series in his first career playoff start, getting knocked out with a head injury on a helmet-to-helmet hit from Jadeveon Clowney.

Nick Foles, who led the Eagles to a Super Bowl title two years ago and a playoff win last year when Wentz was out with injuries, wasn't here to rescue the team again.

Despite suffering a concussion, Wentz went up to every player on the team after the game, thanked them for their contributions and apologized for getting hurt.

"That's just a testament to his character, a great dude," said three-time Pro Bowl right guard Brandon Brooks, who didn't play because of a shoulder injury that requires surgery this week.

The Eagles had their starting offense together for only one game, a 32-27 win over Washington in Week 1.

Wentz held the team together through all the injuries before he got hurt, too.

Safety Malcolm Jenkins, a team leader and the heart and soul of the defense, made it clear he wants a new contract. The three-time Pro Bowl pick has played 2,484 consecutive defensive snaps since the start of the 2017 playoffs.

"I won't be back on the same deal," Jenkins said. "That won't happen. The market's good for safeties right now. I consider myself to be in the top tier of that group and I'd like to be compensated for it."

Three-time Pro Bowl tight end Zach Ertz, who has two years remaining on his contract, could also seek an extension.

HOW TO GET IT RIGHT

The Eagles must surround Wentz with better players. Running back Miles Sanders led all rookies in scrimmage yards and will be a core part of the offense. Running back Boston Scott and wideout Greg Ward emerged from the practice squad and showed value. But the team needs more help at receiver. Jackson is 33, coming off abdominal surgery and owed more than $14 million the next two seasons. Jeffery turns 30 next month and will be returning from foot surgery plus seemed to be on the decline. However, he's owed $11.5 million guaranteed next season.

There's question marks on the offensive line. A tough decision has to be made on Peters at left tackle and three-time All-Pro center Jason Kelce hasn't definitely said he wants to continue to play.

On defense, the secondary must be reshaped, depth is needed on the line and upgrades at linebacker.