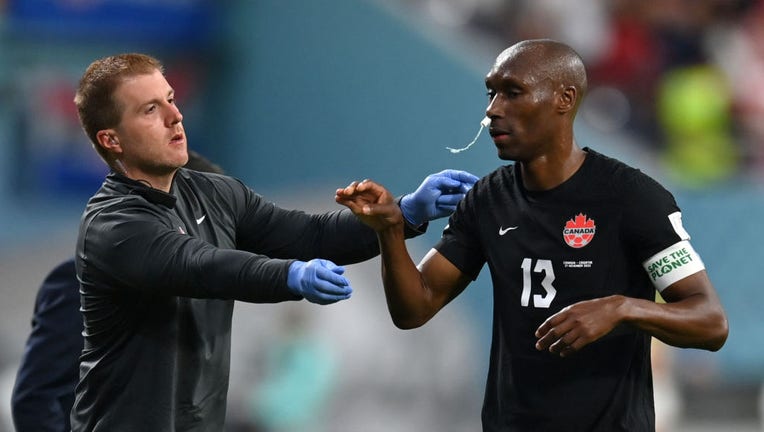 Canada captain Atiba Hutchinson on Sunday suffered a nosebleed during the team’s match against Croatia in the World Cup, and a quick-thinking treatment left many amused fans comparing it to an iconic scene from the 2006 movie "She’s the Man."

Hutchinson, a 39-year-old midfielder, briefly left the pitch during the Group F match between Croatia and Canada to seek medical assistance for a nosebleed. He then returned to play with what appeared to be a tampon stuffed up his nose.

World Cup fans on Twitter immediately began to call out the medic’s innovative way of stopping the nosebleed with some bewildered by the sight:

"Did anyone else just see this dude from Canada with the tampon in his nose," one person asked.

"DOES THAT GUY ON CANADA HAVE A TAMPON UP HIS NOSE?!?" another questioned.

Others were complimentary of the innovative treatment.

"Great use of a tampon in the Croatia Canada game," a viewer chimed in.

Notably, many also compared it to a scene in the 2006 romantic comedy "She’s the Man," starring Amanda Bynes. In the movie, Bynes’ character Viola is cut from a girls’ soccer team and disguises herself as her twin brother Sebastian in order to play on his team.

When the disguised Viola moves to the elite boarding school, her roommate — played by Channing Tatum — finds her box of tampons. Viola, pretending to be her brother Sebastian, tells him she uses the tampons because she "gets really bad nosebleeds" and stuff one up her nose as an example.

"Beckham does it all the time," Bynes’ character says. "It absorbs right up!"

"Can we talk about the fact that Canada’s Atiba Hutchinson is wearing a tampon in his nose during this World Cup game right now," one fan tweeted, along with an image of Bynes from the tampon scene.

"EXCUSE ME did that player from Canada just walk into the game with a tampon up his nose?!?!? LIKE IN SHE’S THE MAN?!? We love to see it," another wrote.

Canada played in its first men's World Cup in 36 years, and just second overall, in Qatar. But they were sent home after a 1-0 loss to Belgium in the opener followed by a 4-1 loss to Croatia, scrubbing their chances of reaching the knockout round.

As the USA and Iran go head-to-head in the World Cup on Tuesday afternoon, Christopher Harris with World Soccer Talk spoke with LiveNOW from FOX's Josh Breslow about the odds of a USA victory.

The Canadians will now turn their attention to preparation for the next 2026 World Cup, which they will co-host with the United States and Mexico.