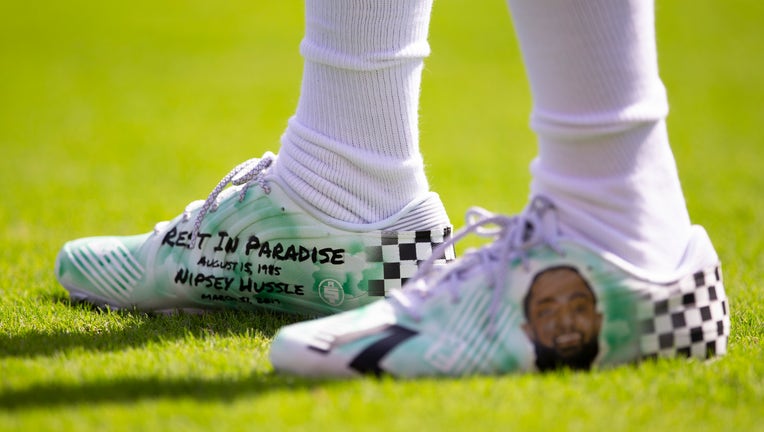 PHILADELPHIA - DeSean Jackson, a wide receiver for the Philadelphia Eagles', has announced that he will wear customized cleats to honor Nipsey Hussle during every game this season.

Jackson says the cleats will be worn during warm-ups before each game in a post on Instagram.

Nipsey Hussle, a Grammy-nominated rap artist known for his entrepreneurship, civic work and community activism, was slain in March 2019 in Los Angeles.

The cleats, which are airbrushed in Eagles Green and feature a black and white checkered pattern on the heel, feature Nipsey's face drawn artistically with Crenshaw imprinted on the sides.

"Rest in Peace" and the date of Nipsey Hussle's birth are also imprinted on the cleats.

"You've got to have faith in what you do and not take no for an answer," a quote by Nipsey Hussle are written on the left cleat.

Once auctioned, the proceeds will benefit Nipsey Hussle's children, Kross and Emani.

The philanthropic and symbolic action by Jackson has already garnered praise from fellow teammate Vinny Curry, free agent Marcel Reece and artist Snoop Dogg -- all who shared praise on his Instagram post.

A previous Instagram post showed other examples of cleats that Jackson plans to wear to honor the late artist.