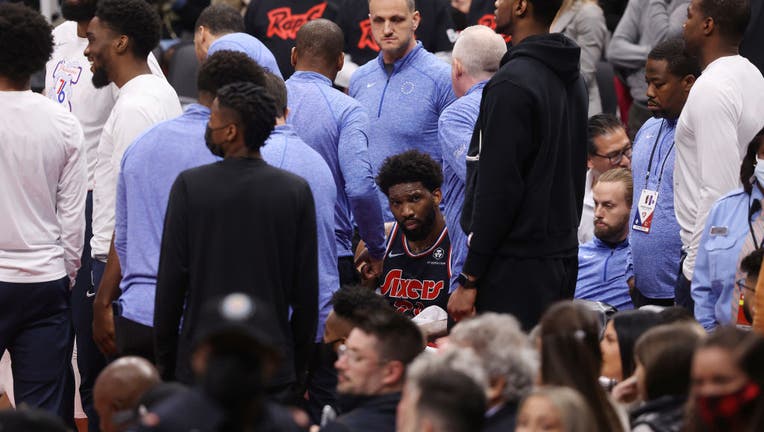 TORONTO, ON- APRIL 28 - Philadelphia 76ers center Joel Embiid (21) sits on the bench as the Toronto Raptors fall the Philadelphia 76ers in Game 6 and lose their first round NBA playoff series 4-2 in Scotiabank Arena in Toronto. April 28, 2022.

He figures it’ll only steel their resolve.

Clearly, the 76ers are not going to be a better team without Embiid, the scoring champion and MVP finalist currently sidelined by a right orbital fracture and mild concussion, injuries that have him officially ruled out for Game 1 and likely Game 2 as well. That said, the 76ers played the Heat once this season without Embiid — and won. They’ll try to do it again Monday night when Philadelphia visits Miami in Game 1 of an Eastern Conference semifinal series.

"Whenever you’re dealing with a team that has to change a little bit, that immediately gets them a built-in sense of urgency," Spoelstra said. "But again, what we’re trying to accomplish, it is so difficult. When you approach it that way, that just puts you there to compete at a high level, the necessary level that is going to be required."

The Heat aren’t exactly in perfect health, either. Jimmy Butler has been slowed by a sore knee, Tyler Herro caught a cold that turned into an upper-respiratory-type mess — but not COVID-19 — and PJ Tucker has been dealing with a calf issue. (All three expect to play Monday.) And Philadelphia native Kyle Lowry missed the last two games of the first-round series against Atlanta with a hamstring strain, so the Heat can't be certain when their point guard will be 100% again. He's been ruled out for Game 1.

The 76ers don’t need any hyperbole along the way to realizing that they can have success against Miami. They need only to pop in the tape from March 21.

Embiid didn’t play that night. The 76ers didn’t have James Harden, either. Didn’t matter. Philadelphia outrebounded Miami 45-34, outscored the Heat 45-30 from 3-point range and pulled off a 113-106 win.

"Well, the biggest adjustment is we don’t have Joel," 76ers coach Doc Rivers said, overstating the obvious for emphasis. "There’s no good thing to it. But we did have one game without Joel against them and honestly, we won the game but I thought it was more than they looked at we didn’t have Joel, I think James was out, so I think mentally that probably played a purpose in that game. That’s not going to happen now. They don’t care who we have on the floor."

"Truth be told, it’s just us figuring out what we can go to through the course of a game in the playoffs," Philadelphia forward Tobias Harris said. "It’s always adapting and figure out how the other teams is playing, what they’re taking away, what they’re allowing, and for us to capitalize in that regard."

Only six players (Tyrese Maxey, Isaiah Joe and Harris for the 76ers; Tucker, Duncan Robinson and Max Strus for the Heat) played in all four Philadelphia-Miami games this season. The 76ers’ defense was stellar, with Gabe Vincent (21.0 ppg in two games) the only Heat player to average more than 20. Team stats were incredibly close: Miami had slight edges in points (404-400) and assists (92-89), Philadelphia had the edge in rebounds (164-159). The 76ers shot 44.8%, Miami 44.6%.

It’s a matchup of two of the all-time winningest playoff coaches. Rivers (102 wins) is fourth on the NBA postseason list behind Phil Jackson (229), Pat Riley (171) and Gregg Popovich (170). Spoelstra (89) is eighth behind the top four, then Larry Brown (100), Red Auerbach (99) and Jerry Sloan (98). Fun fact: if Miami wins Games 1 and 2 of this series then Spoelstra would pass Riley — the Heat president and his boss — in playoff winning percentage.

Embiid’s injury has sent Philadelphia down to the longest shot left in the playoffs, according to FanDuel Sportsbook. The 76ers are the biggest underdog in any of the four conference semifinal series. As the East and West Final Fours were beginning Sunday, Miami was the second favorite (narrowly behind Boston) in the East and had the fourth-best odds for the NBA title behind Phoenix, Golden State and the Celtics.