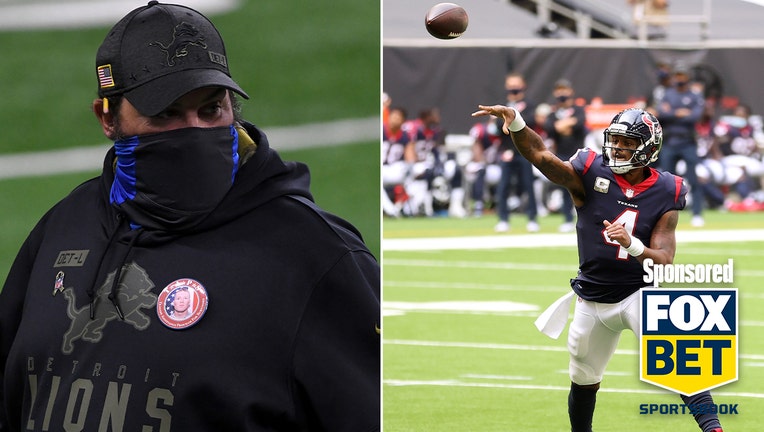 LEFT: Head coach Matt Patricia of the Detroit Lions looks on prior to their game against the Washington Football Team at Ford Field on November 15, 2020 in Detroit, Michigan. (Photo by Nic Antaya/Getty Images) RIGHT: Deshaun Watson #4 of the Houston

It is as much of a tradition on Thanksgiving Day as big balloons at a parade, the unbuckling of the belt after a fulfilling dinner and gearing up for a big day of shopping on Friday.

The Detroit Lions have been hosting a Turkey Day game since 1934. And while the Lions have often not been a prime time contender and the matchups haven’t always been the best, a ton of the games have been entertaining and memorable.

This year, the Houston Texans will arrive at Ford Field for the annual rite of the holiday to play the Lions (12:30 p.m. ET, CBS) in a game that is critical for Detroit’s fading post-season hopes.
FOX Bet Sportsbook is your sports betting home to get the latest odds, prop bets and bet boosts. Check it out now for special promotions when you open an account.

FOX Bet is available in Pennsylvania, New Jersey and Colorado through the FOX Bet app and online at FOXBet.com.

Against the spread, the two teams struggled. Houston’s win over New England on Sunday allowed them to improve to 3-7 against the number while Detroit’s shutout defeat at the hands of the Panthers allowed them to fall to 4-6.

There are a ton of CustomBets and Prop Bets on FOXBet.com. Check it out today for the latest lines and specials.

The history
This is the fifth game in the series between the two teams dating back to Houston’s founding in 2002, with the Texans holding a 3-1 advantage. The Texans’ last trip to Detroit was also a Thanksgiving Day contest that they won 34-31 in 2012.

The Cowboys lead the series 73-46-2 overall. Meanwhile, Dallas has played 53 games on Thanksgiving and has gone 31-20-1 in those games. This will be the 10th time that Washington and Dallas will meet, where the Cowboys have an 8-1 edge in that series. J.J. Watt had three sacks in the game while Matthew Stafford had 441 yards passing and two touchdowns in a losing effort.

The storylines to watch
While the playoffs feel like a long shot for both of these teams, there are plenty of storylines for both as the season heads down the home stretch. Houston did throw a wrench into New England’s playoff run and won its first non-Jacksonville game on Sunday with a 27-20 victory. Deshaun Watson threw for 344 yards and two touchdowns while running for another score. Watson has quietly had a good year among the turmoil that saw the Texans fire Bill O’Brien earlier in the season.

Speaking of firings, Matt Patricia could be on the firing line in Detroit with another year that could be heading down a sub-.500 road. On Sunday, the Lions offense was lifeless in a depressing 20-0 shutout loss at the hands of injury-riddled Carolina. Stafford- who has been bothered by injuries in recent weeks- threw for just 178 yards in the performance while the Lions only had 40 yards on the ground. The Lions would realistically need to win this game to have any playoff prayer with a schedule up ahead that includes the Bears, Packers, Titans, Buccaneers and Vikings.