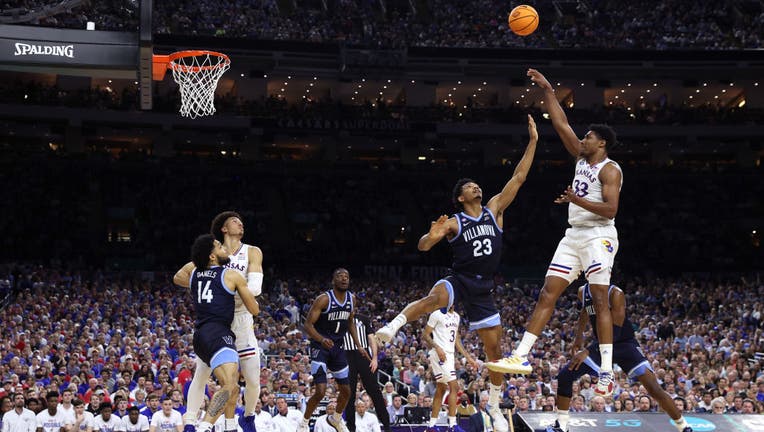 NEW ORLEANS, LOUISIANA: David McCormack #33 of the Kansas Jayhawks shoots the ball as Jermaine Samuels #23 of the Villanova Wildcats defends in the second half of the game during the 2022 NCAA Men's Basketball Tournament Final Four semifinal. (Photo

NEW ORLEANS, La. - Kansas and Villanova waged a 3-point shooting contest at the Final Four with one of them racing out to a big lead in the opening minutes and the other spending the rest of the night trying in vain to catch up.

It all may sound familiar to basketball fans.

But in a rematch of a rout by the Wildcats four years ago in San Antonio, it was the Jayhawks who joyously walked off the court with the win this time at the final buzzer Saturday night. David McCormack muscled his way for 25 points, Ochai Agbaji was nearly perfect from the field and finished with 21, and the lone No. 1 seed to reach the national semifinals rolled to an 81-65 victory.

"This is what we were planning to do that season," said Agbaji, who was 6 of 7 from beyond the arc. "Everyone that was on that team, this is for them and they know it just as much as us."

Now, the Jayhawks (33-6) hope to follow a familiar pattern against Duke or North Carolina on Monday night. The last three times the Jayhawks and Wildcats have met in the tournament, the winner has gone on to win it all.

Playing without injured guard Justin Moore, Villanova (31-7) watched as Kansas scored the game’s first 10 points and eventually built a 19-point cushion. And despite big nights from Collin Gillespie, Brandon Slater and Jermaine Samuels, the short-handed and undersized Wildcats never made it all the way back.

Gillespie, playing in his 156th and final game for the Wildcats, hit five 3-pointers and finished with 17 points, while Slater hit four 3s and had 16 points. Samuels finished with 13 points in the final game of his career.

Each team finished with 13 3-pointers, and the 26 made shots from beyond the arc set a record for a Final Four game, topping the 25 that the same two teams made in 2018 at the Alamodome.

Unlike that night, though, it was the Jayhawks who pounced on Villanova at the start, trying to run ragged a team whose depth problems were only compounded by the loss of Moore, who tore his Achilles tendon in the regional finals.

The Jayhawks applied pressure the moment Villanova inbounded the ball. They unleashed traps in half-court, something they rarely did in the regular season. And they twice picked the pocket of Gillespie, the two-time Big East player of the year, leading to easy baskets and a 10-0 lead before some of the 70,000-plus fans had even found their seats.

"We got off to such a great start in large part because of how we shot the ball," Kansas coach Bill Self said.

Whenever Agbaji, the Big 12 player of the year, wasn’t enjoying the soft rims of the Superdome to knock down 3s, the 6-foot-10, 250-pound McCormack was having his way with the undersized Wildcats in the paint.

The Jayhawks’ lead soon stretched to 15 midway through the first half before Jay Wright finally called timeout.

His counterpart could probably relate: In a game that Self has been loath to rewatch, the Wildcats raced to a 22-4 lead out of the gates four years ago and cruised to a Final Four blowout en route to their third national title.

"This is legit revenge for 2018," tweeted the Mavericks’ Jalen Brunson, who had a big role for Villanova that night.

Daniels and Gillespie did everything they could to rewrite the finish.

Daniels, the New Orleans native who began his career down the road at Tulane, kept making hustle plays around the basket, and Gillespie, the blue-collar kid from Philadelphia, was able to knock down a couple of contested 3s.

The Jayhawks still led 50-34 early in the second half when Wright went to a smaller lineup and ramped up the pressure on defense. The result was three consecutive turnovers, and quick 3-pointers by Slater and Antoine — the seldom-used guard who absorbed many of Moore’s minutes — that allowed Villanova to trim the lead to single digits.

McCormack finally made them pay for going small with a rim-rattling dunk that gave Kansas control again with 10:25 to play.

The Wildcats had one last run in them, getting a three-point play from Samuels to close within 64-58 with just over 6 minutes left. But McCormack once more answered for Kansa, and Braun followed his own bucket with a deep fadeaway 3 as the shot-clock expired, giving the Jayhawks plenty of breathing room down the stretch.