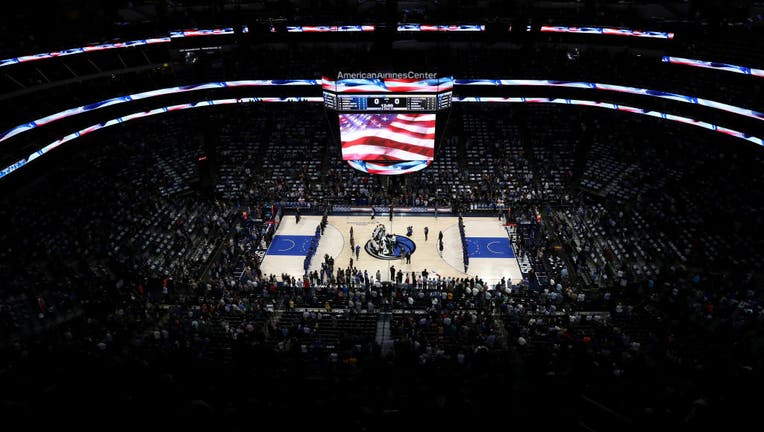 DALLAS, TEXAS - NOVEMBER 20: A general view of American Airlines Center during the national anthem before a game between the Golden State Warriors and the Dallas Mavericks on November 20, 2019 in Dallas, Texas. NOTE TO USER: User expressly acknowledg

Owner Mark Cuban previously said he consulted with NBA Commissioner Adam Silver before making the decision to skip the national anthem prior to games this season at the American Airlines Center.

"With NBA teams now in the process of welcoming fans back into their arenas, all teams will play the national anthem in keeping with longstanding league policy," the league said in a statement, attempting to quell a growing backlash in some parts of the country.

The Mavericks played the national anthem before their home game against the Atlanta Hawks Wednesday night, and both teams stood for the anthem.

Cuban sent out a statement after the NBA swatted away the Mavericks' anthem protocol:

"We respect and always have respected the passion people have for the anthem and our country. But we also loudly hear the voices of those who do not feel the anthem represents them. We feel that their voices need to be respected and heard, because they have not been. Going forward, our hope is that people will take the same passion they have for this issue and apply the same ammount of energy to listen to those who feel differently from them. Only then can we move forward and have courageous conversations that move this country forward and find what unites us."

The Mavs didn't play the national anthem before their lone home preseason game, and hadn't played it before the 12 regular season matchups at the AAC they've played so far.

Cuban did not explain the reason for the move and when first asked about it, denied it. He later confirmed to The Athletic that it was true.

Monday’s game against the Minnesota Timberwolves included a small number of fans in the stands for the first time after the Mavs started letting in vacinated essential workers into the arena to watch home games.

Backlash to not playing the anthem was swift in the Texas Capitol, where Republican Lt. Gov. Dan Patrick urged Cuban to "sell the franchise & some Texas Patriots will buy it." Other GOP lawmakers suggested the tax breaks the American Airlines Center receives should come under new scrutiny.

Patrick said he intends to introduce a bill in the Texas Senate that will ensure the national anthem is played at all events that receive public funding. He claimed the bill has broad support.

"It is hard to believe this could happen in Texas, but Mark Cuban's actions of yesterday made it clear that we must specify that in Texas we play the national anthem before all major events," Patrick said. "In this time when so many things divide us, sports are one thing that bring us together -- right, left, Black, white and brown."

But Cuban's initial decision wasn't without support among NBA coaches.

"This should happen everywhere," New Orleans coach Stan Van Gundy tweeted Wednesday. "If you think the anthem needs to be played before sporting events, then play it before every movie, concert, church service and the start of every work day at every business. What good reason is there to play the anthem before a game?"

The question Van Gundy raises has been debated for some time.

The NBA rule book does not specifically say that the anthem -- or anthems, in games involving the Toronto Raptors, the lone Canadian team in the league -- must be played before games. The only rule regarding the songs states this: "Players, coaches and trainers must stand and line up in a dignified posture along the foul lines during the playing of the American and/or Canadian national anthems."

That rule was relaxed last year in the NBA's restart bubble at Walt Disney World, when the league took no objection to players kneeling for the anthem to show their desire for an end to racial injustice and police brutality.