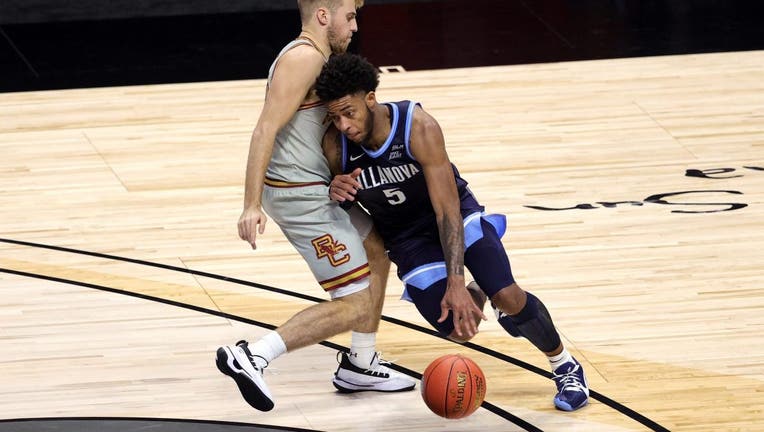 Justin Moore #5 of the Villanova Wildcats fouls Rich Kelly #22 of the Boston College Eagles during the 2K Empire Classic at Mohegan Sun Arena on November 25, 2020 in Uncasville, Connecticut. The Wildcats defeat the Eagles 76-67. (Photo by Maddie Meye

UNCASVILLE, Conn. - Jeremiah Robinson-Earl spent much of the first half of Villanova's season opener on the bench with two early fouls.

He was the difference in the second half, scoring 14 of his 18 points as the Wildcats overcame a nine-point deficit to beat Boston College 76-67 on Wednesday night in the first round of the Empire Classic.

Collin Gillespie added 15 points and Justin Moore and Caleb Daniels each had 14 for the Wildcats, who will play Arizona State in the tournament championship game Thursday.

The teams were tied at 34 going into halftime and the underdog Eagles grabbed the momentum early in the second half.

But the Wildcats responded by going on an 11-1 run.

A jumper by Gillespie put the Wildcats back on top 59-58 and Villanova took the lead for good at 63-61 on a hook shot by Moore with just over six minutes left.

Villanova outscored Boston College 6-1 over the final three minutes to seal it.

The Empire Classic was moved from its traditional home in New York to become part of an 11-day event dubbed “Bubbleville,” being played inside the Mohegan Sun resort casino in Connecticut.

Each program is given its own floor in the resort’s hotel tower and the teams are using back-of-house passageways to avoid the gaming floor and other guests.

Villanova: The Wildcats showed a bit of the rust that Wright was worried about going into the game. They were among the teams forced to take a 14-day hiatus from workouts during the preseason after several members of the program tested positive in September for the novel coronavirus. A combination of illness and injury also had Wright running early practices with only eight players.

Boston College: There were relatively low expectations for BC coming into this season, but the Eagles opened some eyes. They were picked to finish 14th in the ACC after losing four of their top six scorers from a 13-19 team.

“The people who picked us 14th in the ACC needed to watch the game,” coach Jim Christian said. “That doesn’t mean anything to our team. We don’t think we’re 14th. We came here to win this basketball game and we gave ourselves opportunities to do it.”

Boston College hasn’t had much luck against the nation’s elite programs. The Eagles are 6-57 against teams ranked in the top five. This was the first meeting between the two former Big East rivals in 14 years. Villanova has won 54 of the 78 matchups.

The Wildcats were without two players who are expected to play key roles this season. Villanova forward Dhamir Cosby-Roundtree has a shin injury and guard Bryan Antoine missed the trip to Mohegan Sun to more fully recover after re-injuring his right shoulder last month. He had surgery on the same shoulder in 2019.

Wright said his team finally started figuring out Boston College’s 3-2 zone defense in the second half and was able to penetrate more effectively. The Wildcats shot 50% for the game and 54.5% after intermission.