Pacquiao vs Thurman: What to know before watching the most anticipated fight of the year

Boxing’s only eight-division world champion, Manny Pacquiao, will face off against the undefeated welterweight champion Keith Thurman on Saturday, July 20 at the MGM Grand Garden Arena in Las Vegas for the WBA world welterweight title.

LOS ANGELES - Boxing’s only eight-division world champion, Many Pacquiao, will face off against the undefeated welterweight champion Keith Thurman on Saturday, July 20 at the MGM Grand Garden Arena in Las Vegas for the WBA world welterweight title.

The highly anticipated fight will be available on FOX Sports Pay-Per-View at 9 p.m. ET/6 p.m. PT.

Pacquiao returned to the ring in the United States where he defeated former four-division champion Adrien Broner scoring a 12-round unanimous decision in the 70th match of his career, and his first match in the U.S. in two years.

The senator from the Philippines (60-7-2, 39 KOs) who boasts an impressive and lengthy career, is the only sitting congressman and senator to win a world title, and faces his most dangerous challenger yet, especially since the seasoned fighter is 10 years older.

“Keith Thurman is the type of challenge I crave as a fighter. He is the biggest and best test. That is why I want to fight him. We are going to give boxing fans an exciting fight and a great night,” said Pacquiao.

The 30-year-old Keith “One Time” Thurman, is currently the undefeated WBA Welterweight World Champion and holds the longest reign as welterweight champion in boxing, after he redeemed his title following a stoppage victory over Diego Chaves in 2013.

“Manny Pacquiao is beatable. He’s been beaten before in his career. He’s a fan favorite and a legend. For me his boxing tactics are predictable,” said Thurman in a press conference.

Thurman, however, is going up against a fighter who has defeated at least seven current and future Hall of Famers, including Oscar De La Hoya, Ricky Hatton, Marco Antonio Barrera, Erik Morales, Miguel Cotto, Shane Mosley and Juan Manuel Marquez.

In what will be Thurman’s first pay-per-view with FOX Sports, the undefeated champion says he feels grateful for the opportunity to fight the experienced Pacquiao, saying that this is the biggest fight of his career. 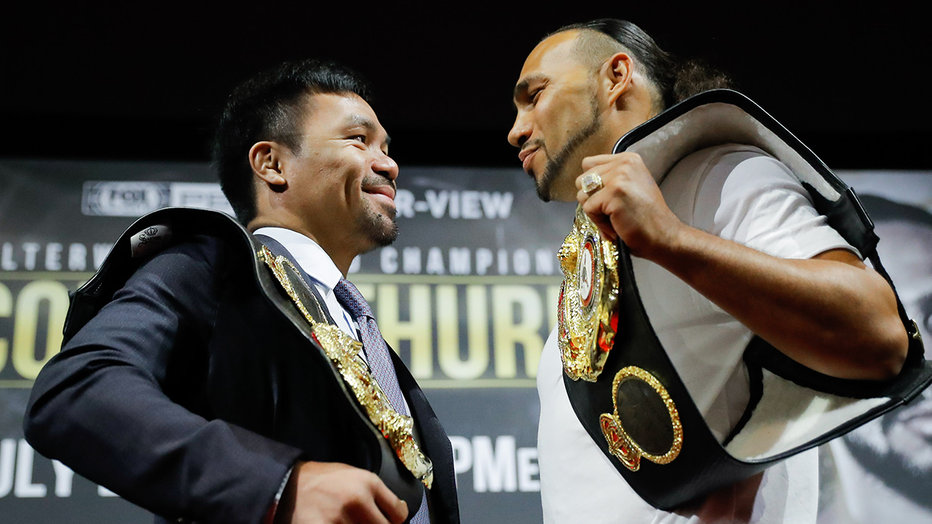 (L-R) Manny Pacquiao and Keith Thurman face off during a press conference at Gotham Hall in preparation for their upcoming fight.

“I get to show the world that Keith ‘One Time’ Thurman is not just a great champion, he can beat legends,” Thurman said.

The high-stakes fight will boil down to whether or not the 40-year-old Pacquiao can match the speed and power of the much younger and eager Thurman.

With Pacquiao’s experience and proven ability to beat better opposition throughout his illustrious career, this will certainly be a tough fight to call.