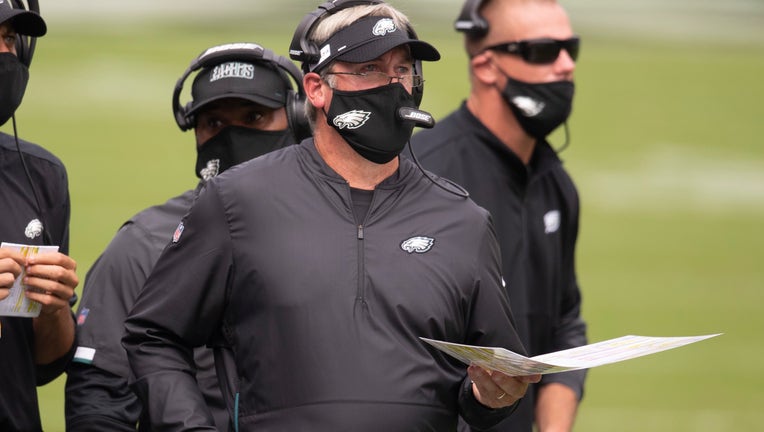 Head coach Doug Pederson of the Philadelphia Eagles looks on against the Cincinnati Bengals at Lincoln Financial Field on September 27, 2020 in Philadelphia, Pennsylvania. (Photo by Mitchell Leff/Getty Images)

PHILADELPHIA - Three years out from a Super Bowl title and three games into the 2020 NFL season, the Philadelphia Eagles remain winless.

Carson Wentz has come under fire for his early-season struggles and they continued to some degree on Sunday.

Meanwhile, the normally aggressive coach Doug Pederson is facing criticism for his decision to punt towards the end of overtime, instead of attempting a 64-yard field goal.

Pederson addressed that decision in an interview on WIP Monday morning and seemed to second-guess himself.

Wentz threw two more picks but used his legs on a game-tying touchdown drive as the Philadelphia Eagles played the Cincinnati Bengals to a 23-23 tie Sunday.

Wentz is going through the worst stretch of his five-year career and has already tossed six interceptions, one fewer than he had in each of the past three seasons. Already missing veteran receiver Alshon Jeffery and rookie first-round pick Jalen Reagor, Wentz lost DeSean Jackson in the first half and tight end Dallas Goedert went down in the first quarter.

The combination of injuries on the offensive line and the skill positions, questionable playcalling and a predictable offensive scheme, plus his own inconsistency, has led to Wentz’s struggles.

“It’s hard when you got some moving pieces and you got different guys in there,” Eagles coach Doug Pederson said. “We’re not going to make excuses for anything. We got to continue to work, practice, get better and sort these things out. When the injuries piled up, it just sort of got us a little bit out of our game-plan rhythm.”

No surprise fickle fans are putting all the blame on Wentz. Those who aren’t still lamenting the fact the Eagles let Nick Foles go two years ago are calling for backup Jalen Hurts, the rookie quarterback who ran for 8 yards on one play of the two plays he was behind center with Wentz split wide.

“He battled. He was tough. He had some tough runs. He had the scramble for the touchdown. He played physical,” Pederson said of Wentz.

Tough usually wins over Philly. Apparently, that doesn’t apply to a franchise quarterback who lowered his shoulder and barreled into defenders when nothing else seemed to work.

Pederson brushed off questions about possible benching Wentz in the future for Hurts during his interview on WIP.

Pederson also addressed how some of the injuries may have impacted Wentz's performance.

"Yesterday it was tough because we lost Dallas Goedert on the ninth play of the game, and then DeSean Jackson goes out. Obviously, those are guys that we gameplan for," Pederson said. "You start moving some pieces around and it just becomes difficult."

Despite their troubles, Pederson reminded fans the Eagles are only a half-game out of first place in the NFC East after the rest of the division suffered losses on Sunday.

Pederson added that he still has faith in his team and players, but views Sunday's outcome as a learning experience.