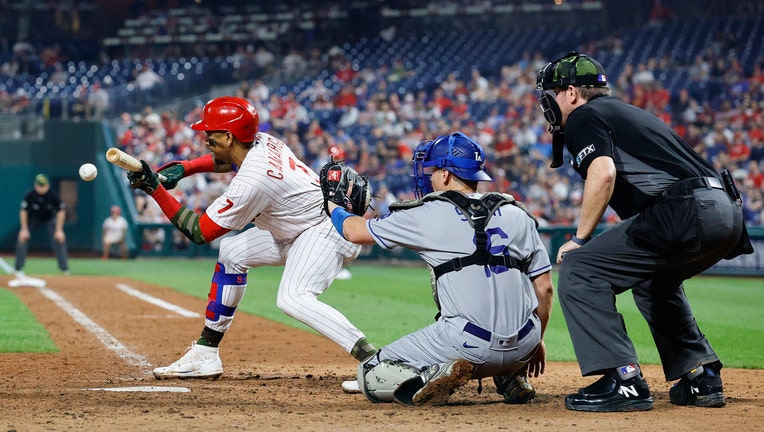 PHILADELPHIA, PENNSYLVANIA - MAY 20: Johan Camargo #7 of the Philadelphia Phillies bunts during the eighth inning against the Los Angeles Dodgers at Citizens Bank Park on May 20, 2022 in Philadelphia, Pennsylvania. (Photo by Tim Nwachukwu/Getty Image

Trea Turner doubled and had an RBI for the NL West-leading Dodgers, who opened a 10-day, 10-game road trip.

The Phillies continued to struggle without slugger Bryce Harper, who missed his fifth straight game after having a platelet-rich plasma injection in his injured right elbow on Sunday.

"It’s different," Dodgers manager Dave Roberts said of Philadelphia’s offense. "You’re talking about an MVP that’s not in the lineup. (But) we’re not going to feel sorry for those guys. I’m sure he’s going to be in there at some point in time soon. So we’re not apologizing for Bryce Harper not being in the lineup."

Philadelphia lost for the fourth time in the last five and avoided its third shutout defeat over that stretch when J.T. Realmuto hit an RBI double with two outs in the ninth after Kyle Schwarber doubled just in front of Realmuto.

"Maybe it gets them going," Philadelphia manager Joe Girardi said.

The RBI snapped a 21-inning scoreless skid for the Phillies, who have totaled just four runs in four games since returning home Tuesday after winning five of seven on a West Coast trip.

Girardi acknowledged that pitchers might pitch more aggressively to hitters without Harper waiting to bat but didn’t think the Phillies were putting extra pressure on themselves without their two-time MVP.

"Every at-bat when you’re in the big leagues is a big at-bat," he said.

Asked when Harper might be back, Girardi said, "We’ll see about tomorrow."

The Dodgers got on the board in the first on Justin Turner’s RBI groundout off Ranger Suarez (4-2) and made it 3-0 in the second on Freeman’s two-out, two-run single to center just past the glove of Suarez.

"Do everything you possibly can to get those guys in," Freeman said.

"Just not throwing strikes and they waited him out," Girardi said.

Urías (3-3) gave up two hits and struck out five with no walks. Craig Kimbrel came on with two outs and Realmuto on second in the ninth. After a bunt single by Johan Camargo, Kimbrel struck out Odúbel Herrera to halt Philadelphia’s rally attempt for his eighth save in as many tries.

Schwarber had a pair of doubles for the Phillies, whose bats have taken a complete turn since the last time they met the Dodgers a week ago. The Phillies couldn’t complete a four-game sweep at Los Angeles without Harper in the lineup on Sunday, but accumulated 33 runs on 45 hits, including 20 for extra bases, while taking three of four from the Dodgers from May 12-15.

Harper originally was projected to return to the lineup against San Diego on Tuesday or Wednesday, but soreness in his right throwing elbow following the injection has persisted and kept him on the bench. He has been playing exclusively at designated hitter since injuring his arm on a throw from right field last month. He last played the field at Miami on April 16.

Turner extended his hitting streak to 12 consecutive games with a fifth-inning double. He is batting .364 with five doubles, a homer and eight RBIs during the streak.

Phillies: OF Mickey Moniak (broken right hand) began a rehab assignment at Single-A Clearwater on Friday. Moniak doubled and tripled in three at-bats in the first game of a doubleheader.

RHP Aaron Nola (1-4, 3.64) takes the mound for Philadelphia in the second game of the three-game set Saturday night. RHP Mitch White (1-0, 4.82) will be the opener for the Dodgers.