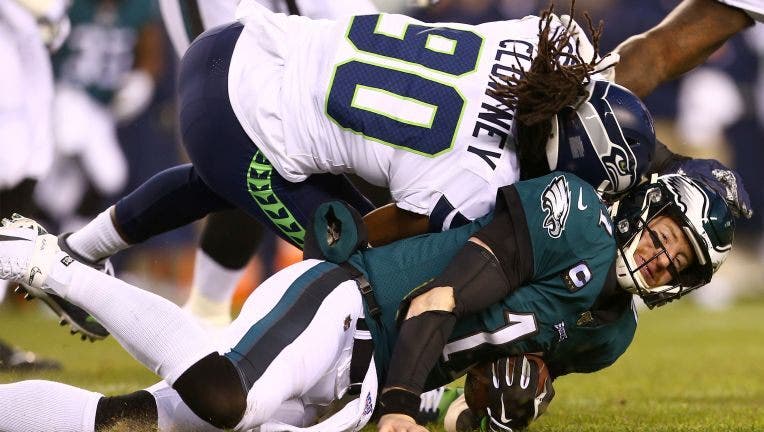 Quarterback Carson Wentz #11 of the Philadelphia Eagles is hit by Jadeveon Clowney #90 of the Seattle Seahawks during the NFC Wild Card Playoff game at Lincoln Financial Field. (Photo by Mitchell Leff/Getty Images)

PHILADELPHIA - Seattle’s Jadeveon Clowney was not fined for the hit on Eagles' quarterback Carson Wentz during the NFC wild-card game, according to a report.

Wentz was injured when Clowney hit him helmet-to-helmet from behind in the first quarter of a 17-9 loss.

“I think what Carson Wentz did is heroic and should be highlighted as an example of how an unbelievably skilled and competitive athlete understands the seriousness of concussion injury and is willing to honestly report it and receive the care that he needs independent of his desire and drive to continue to participate in the game,” Dr. Allen Sills told The Associated Press on Thursday. “Having a concussion and playing through it is not about toughness. That’s demonstrating a lack of understanding of the severity of the injury. So I applaud Carson Wentz for understanding how serious this injury is and for getting appropriate care that he needs.”