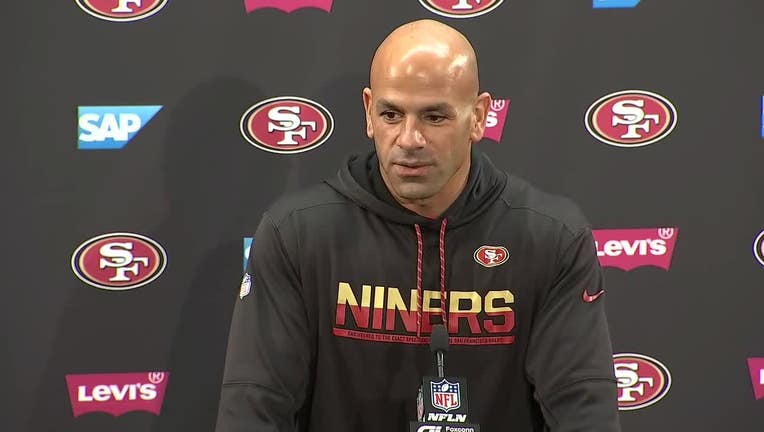 Robert Saleh has served as the 49ers' defensive coordinator since 2017.

PHILADELPHIA - A day after the Philadelphia Eagles parted ways with head coach Doug Pederson, reports of their search for his replacement are already swirling.

Eagles Chairman and CEO Jeffrey Lurie announced the team would be moving on from Pederson on Monday afternoon.

Since then, reports have surfaced that the team has been in contact with Oklahoma Sooners head coach Lincoln Riley and have requested permission to interview San Francisco 49ers defensive coordinator Robert Saleh.

ESPN's Adam Schefter broke the news of the Eagles request to the 49ers on Tuesday, while Sports Illustrated reported the team's contact with Riley just hours after Pederson's firing was announced.

Riley, 37, has been a hot name on the coaching market over the last few seasons after his success in the college ranks with current NFL quarterbacks like Baker Mayfield, Kyler Murray, and Eagles quarterback Jalen Hurts.

Saleh, 41, has garnered interest from teams over the last two offseasons after the 49ers, led primarily by their staunch defense reached Super Bowl LIV, where they lost to the Kansas City Chiefs.

Smith, 38, has been running the Titans offense since 2019 and has helped spark a career resurgence for quarterback Ryan Tannehill.

Todd Bowles, a 57-year-old New Jersey native would bring likely bring the most experience of the rumored candidates having been the head coach of the New York Jets from 2015-2018. Bowles, a Temple University graduate, worked on the Eagles defensive staff back in 2012. In his time as a head coach with the Jets, he amassed a 26-41 record.

The Eagles are also expected to speak with New England Patriots linebackers coach Jerod Mayo, according to Rapoport. A surprise candidate to some, Rapoport says he will meet with the Eagles sometime this week. Mayo spent his entire sever year playing career in New England, the team added him to their coaching staff four seasons later.

Despite the Eagles 4-11-1 season under Pederson in 2020, whoever the Eagles hire will have big shoes to fill. In his five seasons, Pederson led the team to three consecutive playoff appearances, including the first Super Bowl title in franchise history.

Jeffrey Lurie said Doug Pederson is like family to him and it was a tough decision but it goes with the territory. Lurie added his first allegiance is what is best for the Philadelphia Eagles and fans.

During a press conference on Monday, Lurie mentioned former Eagles and current running backs coach Duce Staley as a potential candidate. Staley had previously interviewed for the job in 2016, when the Eagles ultimately hired Pederson. He also stepped in to take over head coaching duties during training camp this past season when Pederson was diagnosed with COVID-19.

Eagles safety Rodney McLeod was joined by former teammate Malcolm Jenkins in throwing some support behind Staley on Monday.