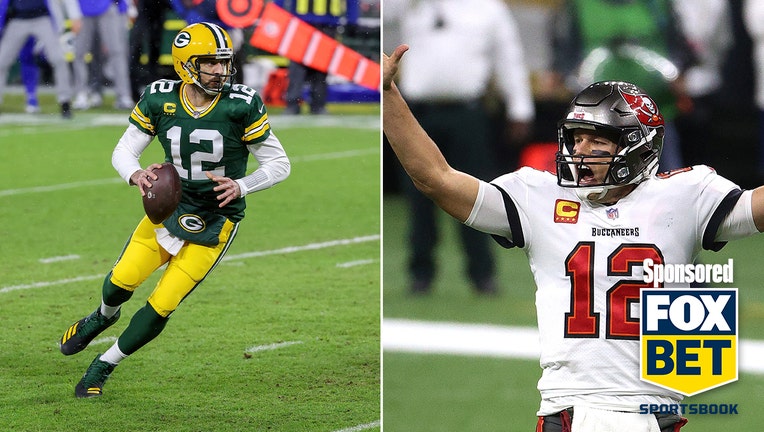 LEFT: Aaron Rodgers #12 of the Green Bay Packers drops back to pass in the second quarter against the Los Angeles Rams during the NFC Divisional Playoff game at Lambeau Field on January 16, 2021 in Green Bay, Wisconsin. (Photo by Dylan Buell/Getty Im

When you look through the history of the NFC Championship game, there have been quarterback matchups that have stood the test of time.

While those have all been great, none may stand out more than the one that will take place on Sunday when Aaron Rodgers- who is likely to win the National Football League’s MVP award at age 37- faces off against Tom Brady, the 43 year old ageless wonder seeking his 10th trip to the Super Bowl in search of a seventh ring.

No matter how many storylines there are, that is the main one when Brady and the Tampa Bay Buccaneers head to Lambeau Field to face Rodgers and the Green Bay Packers Sunday (3:05 p.m., FOX) with the winner heading to Super Bowl LV on Feb. 7 at Tampa’s Raymond James Stadium.

Green Bay is 11-6 against the spread this season while Tampa Bay is 10-8. When it comes to the over-under, the Packers have gone over on 10 of their 17 games while the Buccaneers games have gone over in 10 of 18 games.

This is the second meeting between the two teams this season. In the first matchup back on Oct. 18, Tampa Bay held Rogers without a touchdown pass – the only time this season that happened- and forced two interceptions in turning a 10-0 deficit into a 38-10 victory that has been the best victory for the Buccaneers season. There’s also this statistical oddity: the Packers last six playoff eliminations dating back to 2012 have come against teams that also beat them in the regular season. Since Rodgers took over as quarterback in 2008, Green Bay is 3-6 in "revenge" playoff games against teams that have beat them during the regular season.

There are a series of interesting angles in this one historically. Brady is 9-4 in 13 previous appearances in conference championship games, all of them coming with the New England Patriots in the AFC. Rodgers is 1-3 in title games as a starting quarterback, but this is the first time that he will play in one at Lambeau.

The Packers have been the best team in the NFC pretty much since the start of the season and there was nothing in last week’s 32-18 win over the Los Angeles Rams to shake that impression. The main reason for that has been Rodgers, who has played at the highest level of his Hall of Fame career in likely earning his third MVP award. He has thrown 50 touchdowns and just five interceptions in 17 games this year. However, two of those interceptions came in that matchup in Tampa in October, where he only threw for 160 yards and put up a passer rating of 35.4.

However, Green Bay is more than just Rodgers and the passing game with DaVonte Adams. Aaron Jones has become a bigger factor in the offensive attack. Also, the Packers defense forces teams into uncomfortable situations and takes advantage of that.

Since their Week 13 bye week, Tampa Bay has looked like a different and better team. They are 6-0 in that stretch, averaging 34.8 points a game offensively. While the offensive weapons of Brady, Leonard Fournette, Rob Gronkowski, Mike Evans and Chris Godwin get the attention, the formula in that equation has been ball possession. The Bucs have turned the ball over twice in those six games while forcing 11 opponent turnovers – including four last week during the 30-20 win over the Saints. To win on the road, they will likely have Rodgers and company give the ball up.

One other factor to keep in mind is the weather. Snow is in the forecast for Green Bay on Saturday night and Sunday with temperatures in the high 20’s. In their history, Tampa Bay is 3-24 in games played in temperatures played under 40 degrees.