TAMPA, Fla. - Sarah Thomas is pinching herself as she prepares to be part of NFL history when she takes the field as the first woman to referee the Super Bowl.

"It's just so meaningful. I never set out to be the first in any of this," said Thomas.

But she's not new to being a trailblazer. That started when she was a kid.

"When I was in fifth grade, I was the only female girl that played on the basketball team in Pascagoula, Mississippi," she recalled.

She caught the bug for refereeing from her brother, who officiated high school football. He invited her to a meeting with other officials and she was hooked.

"I fell in love that moment. These guys actually get together and discuss rules and what-if scenarios and just plays that happen and challenge each other, and it felt that I could give back, in a sense, to organized sports," she continued. "I love sports, but this football officiating thing took off. I didn't play the game of football, but I have been blessed to officiate the game of football. Fell in love with it. Officiating, refereeing junior high, high school games, college and then the NFL."

Being the first female in that position at the big game, she feels an additional responsibility as a role model, knowing little eyes are watching -- including those in her own home.

"It means a lot to me," she offered. "I have a precious little girl that is watching her mom. Not just on the football field, but daily at home. And I want her to know seeing it, believing it, and you can do it. She said, ‘Mom, they asked me what I wanted to do in the future and I told them I wanted to be a mom, a teacher and a ref like my mom.’" 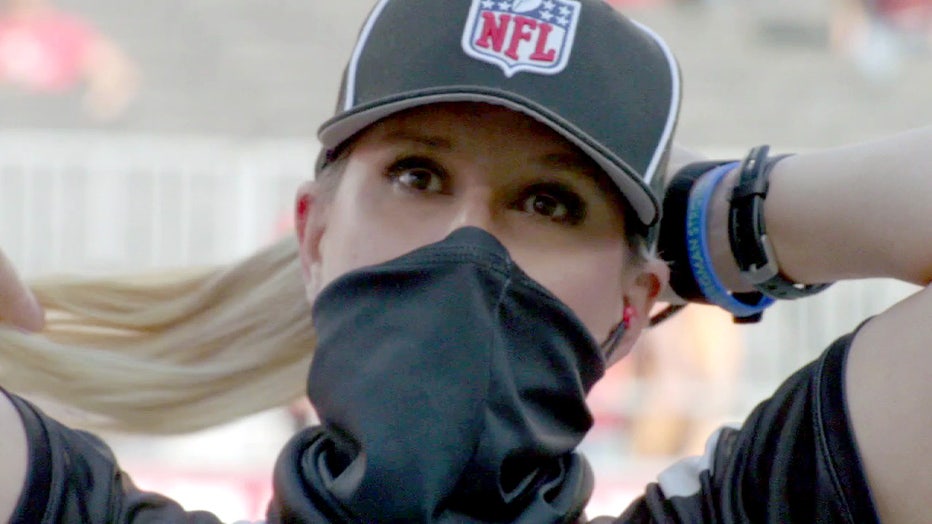 And Thomas welcomes seeing other women follow her path too.

"Just go do it," she advised. "Understand and have a mindset when you do walk through the door to that first meeting and go out onto that football field, you're going to have to put a lot of hard work into what you're doing to master this craft. And none of us are truly masters at this craft."

So while the Super Bowl will be a big win for the Buccaneers or the Chiefs, it will be monumental for Sarah and girls and women everywhere.

"When I get on that field and I take it all in, I know that I'm probably going to get a little teary eyed. Just understand this is remarkable and I'm truly honored and humbled to be part of this year's Super Bowl crew."