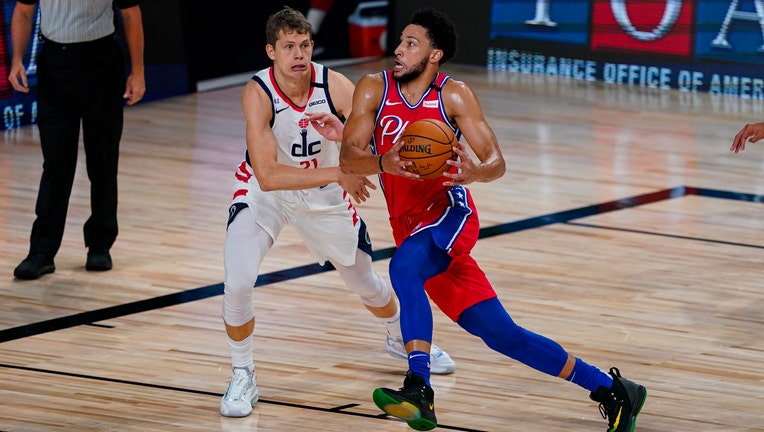 Ben Simmons #25 of the Philadelphia 76ers drives on Moritz Wagner #21 of the Washington Wizards during the first half of an NBA basketball game at The Arena at ESPN Wide World Of Sports Complex on August 5, 2020 in Lake Buena Vista, Florida. (Photo b (Getty Images)

PHILADELPHIA - 76ers forward Ben Simmons has been named to the NBA's All-NBA third team for the first time in his career.

Simmons was recognized for the second time this offseason after he received first-team honors for the NBA's All-Defensive Team.

Simmons appeared in 57 games during the season, his third in the NBA, and averaged 16.4 points, 8 assists, and 7.8 rebounds. His 8 assist average was sixth in the NBA last season.

He also led the league with 2.1 steals per game.

The former number one overall pick was also named to his second consecutive All-Star game.

The 2019-2020 season marks the third straight season that at least one 76er has been named to an All-NBA team, with Joel Embiid making the cut the previous two seasons. Embiid did not make an All-NBA team this season, finishing with three first-team votes, 14 second-team votes, and 22 third-team votes for a total of 79 points.