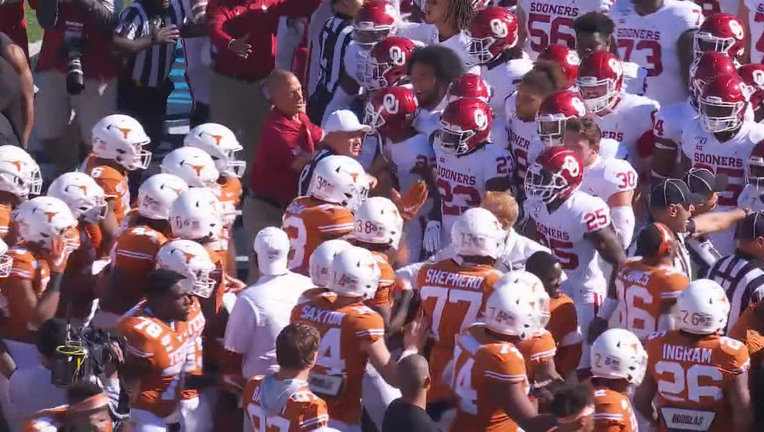 Texas and Oklahoma made a request Tuesday to join the powerhouse Southeastern Conference, with SEC Commissioner Greg Sankey saying the league would consider it in the "near future."

A day after the Big 12 schools notified the league that they would not be extending an agreement that binds conference members to 2025, the schools publicly stated for the first time they want to join the SEC.

Oklahoma and Texas sent a joint letter to Sankey, requesting "invitations for membership to the Southeastern Conference starting on July 1, 2025."

"We believe that there would be mutual benefit to the universities on the one hand, and the SEC on the other hand, for the universities to become members of the SEC. We look forward to the prospect of discussions regarding this matter," the schools said in a letter signed by each university's president.

Oklahoma and Texas are bound to the Big 12 and its eight other members through the 2024-25 school year by a grant of media rights that runs concurrent with the conference's billion-dollar television deals with ESPN and Fox.

Joining another conference before the grant of rights expires would cost the schools tens of millions of dollars per year in relinquished revenue and possibly exit penalties.

Competing in the conference as a lame duck for four more seasons doesn't benefit the schools and isn't ideal for the Big 12, either. If the conference is going to survive, it needs to begin rebuilding soon to show stability heading into negotiations for its next television contract.

Meanwhile, the SEC is poised to grow to 16 teams with the additions of Texas and Oklahoma, half of which have won at least one national championship in football since 1980.

The SEC's most recent television contract with ESPN, set to take effect in 2024, is expected to increase revenue distribution to its member schools to about $67 million per year.

The news broke last week at SEC Media Days in Hoover, Alabama, that Texas and Oklahoma, the Big 12's flagships universities, had been discussing a possible move with Southeastern Conference officials. The Houston Chronicle was first to report the intended jump, but neither the schools nor the SEC would publicly confirm the parties had been in discussions.

"While the SEC has not proactively sought new members, we will pursue significant change when there is a clear consensus among our members that such actions will further enrich the experiences of our student-athletes and lead to greater academic and athletic achievement across our campuses," Sankey said.

SEC bylaws state at least three-fourth of its members (11 of 14) must vote in favor of extending an invitation for membership.

Texas A&M joined the conference in 2011 along with Missouri in the SEC's most recent expansion. A&M initially voiced concerns about allowing an in-state rival to join the conference, but athletic director Ross Bjork has since suggested his school would not shy away from added competition.

The boards of regents at Texas and Oklahoma each announced Tuesday that meetings would be convened Friday with conference affiliation on both the agendas.

The Big 12 was created from a merger of sorts between the Big Eight and Southwestern Conference in 1994 and began play in 1996. Texas and Oklahoma are the conference's most notable brands. They have the richest and most successful athletic departments, and they are the only Big 12 schools to win national college football championships.