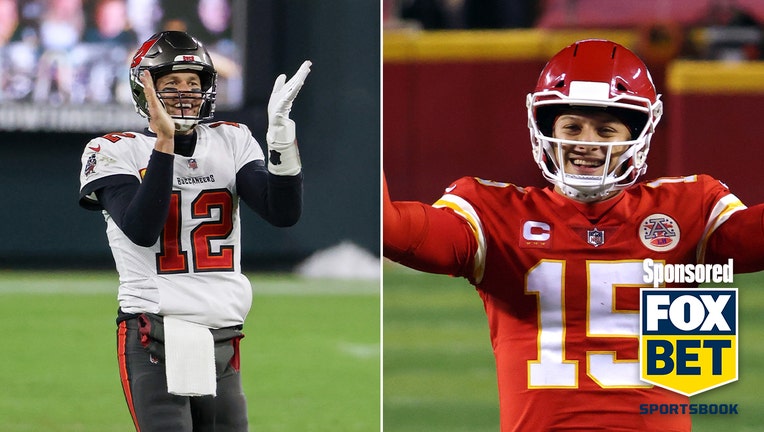 FILE - LEFT: Tom Brady #12 of the Tampa Bay Buccaneers celebrates in the fourth quarter against the Green Bay Packers during the NFC Championship game at Lambeau Field on Jan. 24, 2021 in Green Bay, Wisconsin. RIGHT: Patrick Mahomes #15 of the Kansas (Jamie Squire/Dylan Buell/Getty Images)

On football’s ultimate weekend, it is easy for everyone to become a football expert.

You watched all season; you see the glamour names and you sat around for two weeks plotting a few wagers for the upcoming game – especially at the FOXBet Sportsbook.

And while trends and stat figures may not necessarily mean a guaranteed winner and a big payoff at the end of Super Sunday, it is good to look at the underlying numbers on the players, teams and Super Bowl history before you load up the app and place your bets on either the Kansas City Chiefs and the Tampa Bay Buccaneers.

Here are some of our favorite trends and numbers you need to know before Super Bowl LV:

1) Out of 54 Super Bowls, only six underdogs have covered the spread but not won the game.

Usually a golden rule on a game like this is pick the team that you figure is going to win the game outright. In this game, with Kansas City being 3 ½ point favorite, that’s a line that could invite and entice people to take the Buccaneers to cover with just a field goal loss like they did in November. For those looking for the "cover without Lombardi" crew, consider the last one that had it happen was Arizona, who lost to Pittsburgh in Super Bowl XLVIII as seven point favorites by four (27-23).

2) This will be Tom Brady’s third time in 10 Super Bowl appearances that he will be the underdog. He has won the previous two times.

Given that the Patriots were favorites in most of the years that they went to the Super Bowl, that’s not surprising. The two previous times that Brady was an underdog and ended up winning the title was Super Bowl XXXVI against the Rams- the Patriots first championship- and in Super Bowl XLIV against Seattle.

3) Patrick Mahomes has "only" thrown for more than 300 yards twice in seven career playoff games. (The prop bet on Mahomes passing yards is 330 ½ yards.)

There’s the image that the Chiefs do nothing more than play run and gun football since Mahomes has taken over as quarterback. That’s not necessarily true. Six of the seven playoff games Mahomes has been in have featured completion percentages of more than 60 percent. Still, Mahomes has two 300 yard performances to his name- last year’s 321 yard performance against Houston in the divisional round and his 325 yard effort in the AFC Championship game two weeks ago against Buffalo. The highest amount of attempts he’s had to make was 42 in the Super Bowl last year against the 49ers. The better number to gauge than pure yardage: Mahomes has 17 touchdown passes to just two interceptions. (Both of those came against the 49ers.)

More amazing, those performances occurred in back to back Super Bowls. Brady threw for 466 in the amazing 34-28 comeback win against the Falcons in Super Bowl LI for his fifth ring , followed that up with a 505 yard effort in the 41-33 loss to the Eagles in Super Bowl LII. That game may have been Brady’s best in a Super Bowl- his passer rating of 115.4 is the best of any of the nine he’s had in the Super Bowl. On FOXBet Sportsbook, Brady’s over/under on passing yards is 300 1/2 yards.

5) The Chiefs are trying to become the first AFC team in Super Bowl history to beat the same NFC opponent in the same regular season and Super Bowl.

That stat sounds wrong, but it’s true. Four other AFC opponents – Buffalo in 1990 and 1993, Tennessee in 1999 and New England in 2007- had playoff rematches against an opponent they beat in the regular season. All four times, they lost the second game. Overall, the team that won a regular season matchup has gone 6-7 in Super Bowls.

The over/under on Gronkowski receiving yards on FOXBet in 30 ½ yards. Everybody remembers the old playoff Gronk who has standout games in the biggest moments. But it is important to remember that with the amount of weapons that Brady and the Bucs offense has- and Gronkowski’s wear and tear becoming more evident- that he isn’t a primary target anymore. In three playoff games this year, Gronkowski has two catches combined for 43 yards.

On the flip side of Gronk, there’s Kelce. Three of the last five playoff games have seen Kelce finish with over 100 yards receiving with a combined total of seven touchdowns. This season, he’s caught touchdown passes in six straight games and seven of the last eight. If you are looking for a prop bet for touchdown catches, this is a pretty good one to go with.

8) Underdogs have won nine of the last 13 Super Bowls outright, but the favorite has won the last two games.

There was a stretch of five straight games (Super Bowl XLVI to Super Bowl 50) when the underdog won the game outright. However, that trend has reversed with only the Eagles in Super Bowl LII winning as the underdog in the past four years. So, it is fair to wonder if that trend is flipping.

If you are wanting to place a wager on Leonard Fournette or Clyde Edwards-Helaire just because the odds are good (Fournette is +2500, Edwards-Helaire is +3500) should be foreworn. The last running back to win MVP of a Super Bowl was Terrell Davis, who was MVP for the Denver Broncos in Super Bowl XXXII. Last year, there was a bit of a grumble because of the numbers that Chiefs running back Damien Williams (17 carries, 104 yards, 2 TD) was putting it up. While the seven running backs who have won the award would rank it tied for second with wide receiver on the position list, it is important to remember 30 of the awards have gone to quarterbacks. And since Davis won the last for a running back, three linebackers – Ray Lewis, Malcolm Smith and Von Miller-  have taken home the trophy. In NFL circles, the running back being the star of the biggest game of the year just isn’t likely anymore.