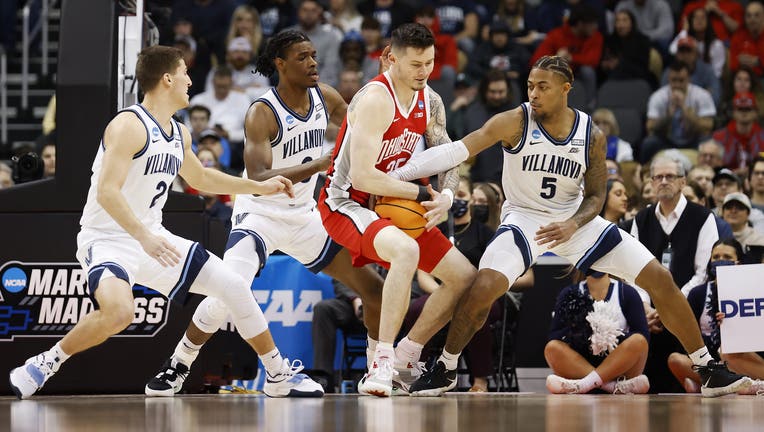 PITTSBURGH, PENNSYLVANIA - MARCH 20: Kyle Young #25 of the Ohio State Buckeyes is stripped of the ball by Justin Moore #5 of the Villanova Wildcats in the first half of the game during the second round of the 2022 NCAA Men's Basketball Tournament at

PITTSBURGH - Collin Gillespie saw Eric Dixon out of the corner of his eye and sent a cross-court pass that doubled as permission to let it fly.

So Dixon did, knocking down the biggest shot of his team's season, one that sent the second-seeded Wildcats back to familiar territory against a familiar opponent on a familiar stage.

Dixon's 3-pointer from the wing with 1:38 to go gave Villanova the breathing room it needed in a 71-61 win over seventh-seeded Ohio State in the second round of the NCAA Tournament on Sunday, propelling the Wildcats (28-7) back to San Antonio to face 11th-seeded Michigan (19-14) in the South Regional semifinal on Thursday.

Four years ago, Gillespie was a freshman on the Villanova team that held off the Wolverines for the program's second national title in three seasons. Now he's a two-time Big East Player of the Year and the unquestioned leader of a group that seems to feed off Gillespie's "follow me" vibe, one on full display in the final moments.

The Wildcats led by 64-59 when Gillespie backed into the post. The Buckeyes scrambled to double-team him, freeing up the 6-foot-8 Dixon. Gillespie had options.

The fact he sent it over to a player with just 28 3-point attempts on the season hardly mattered. It was the smart play. Gillespie made it. It's what he does.

Dixon caught the ball and drilled the shot, buoyed by the show of faith from Gillespie.

"I think they have the confidence if ‘Collin is giving it to me, that’s telling me, Go ahead and shoot it,’ " Villanova coach Wright said.

Gillespie finished with 20 points, four assists with a steal and a rebound against just one turnover in 38 minutes. Dixon's 3-pointer gave him 13 points and eight rebounds as the Wildcats fended off a second-half push from the Buckeyes (20-12), who trimmed a 15-point deficit to two before Villanova regained its footing.

The Wildcats made all of the right ones when it mattered. Ohio State missed six of its final seven shots and turned it over twice after Jamari Wheeler's 3-pointer pulled the Buckeyes within 60-58 with 5:39 to go.

They got no closer. Jermaine Samuels hit a layup and Gillespie knocked down a pull-up jumper before Dixon delivered the knockout punch.

"Credit to (Villanova), they played hard," Ohio State star E.J. Liddell said. "I thought we went out there and played hard but we’ve got to take care of the ball a little bit more."

Liddell scored 17 points and six rebounds in likely his final game with the Buckeyes before heading to the NBA. Big Ten Freshman of the Year Malachi Branham — who could be joining Liddell in the pros — scored 15 of his 23 in the second half.

It just wasn't enough to send the Buckeyes to the second weekend of the tournament for the first time since 2013. Ohio State never led and was forced to play the final 8:55 without forward Kyle Young, who was being evaluated for a concussion after taking a blow to the head. Young missed several games late in the season while in the concussion protocol.

The Buckeyes found a way to keep it close after he left but never got over the top while falling to 0-3 in the second round under coach Chris Holtmann.

The second round used to be a stumbling block for the Wildcats. Not anymore. After a so-so — by the program's high standards — regular season, Villanova looks dangerous once again.

A week after rolling to the Big East Tournament title, the Wildcats won their first two tournament games in Pittsburgh by double digits, just as they did in 2018 on their way to a national title that culminated with a blowout over Michigan.

Gillespie and Samuels both said they didn't consider the parallels between 2018 and 2022 until someone brought it to their attention. It's a different team than the one that was never tested on its way to a championship.

Yet just like that group, this one appears to be peaking, led by the unassuming Gillespie.

"We never expected this," Wright said of Gillespie. "All of the intangibles that he brings we expected. To be able to go out and dominate games like he does, we did not."

Ohio State had no answers. Two days removed from a dominant win over Loyola Chicago, the Buckeyes' swagger vanished against the more polished and poised Wildcats.

"When (Ohio State) makes the run if you haven’t been there before and know that you can withstand that, that this is what happens when you play great teams and it’s happened to you before, and you can fight through it, if you haven’t done it, it’s hard, you can panic," Wright said. "But all these guys have been there."

It's the Villanova way.