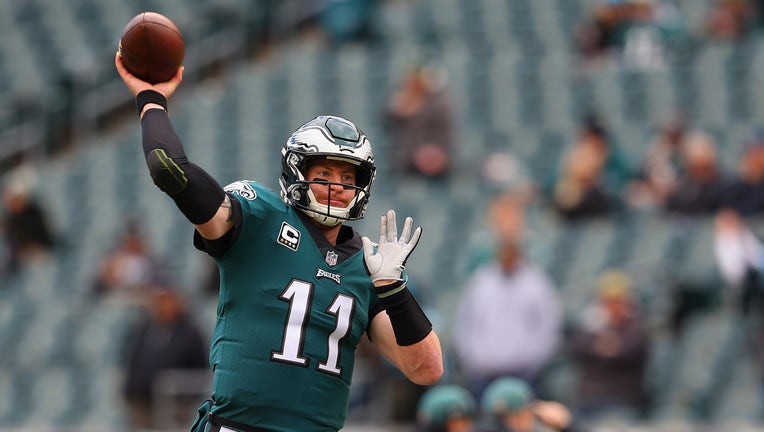 Quarterback Carson Wentz #11 of the Philadelphia Eagles throws a pass as he warms up before taking on the Carolina Panthers at Lincoln Financial Field. (Photo by Mitchell Leff/Getty Images)

PHILADELPHIA - With 110 days left until the Philadelphia Eagles open up their season, most of the team will take the field for organized team activities Tuesday.

Among the notable absentees was veteran safety, Malcolm Jenkins. ESPN’s Adam Schefter reported Jenkins’ absence Tuesday morning and noted that he also missed the team's offseason workout program for the first time in his career.

When asked about Jenkins’ absence Tuesday, head coach Doug Pederson explained, “He’s a guy that I don’t have any worries about.” Pederson did not go into private conversations he’s had with Malcolm, or whether or not the situation was contract related.

Jenkins, 31, has spent the last five seasons with the Eagles.

Among the Eagles that will be on the field Tuesday is franchise quarterback Carson Wentz. Pederson announced Tuesday that Wentz would be a full participant during OTAs, after a back injury ended his 2018 season prematurely.

“He’s been working with the guys all offseason and we’re looking forward to these next 10 practices with him,” Pederson said of Wentz, “I’m not going to hold him back.”

While the team does not give out an injury report at this point in the offseason, veterans Nigel Bradham, Brandon Brooks, and Fletcher Cox are recovering from offseason procedures.