The Delaware Valley experienced a vibrant red sunset Tuesday evening as Western wildfire smoke increases over our region. These bright red sunrises and sunsets are caused by the smoke particles scattering the shorter wavelengths of light such as yellow, green, blue and violet.

PHILADELPHIA - Air quality alerts are in effect for much of the Delaware Valley on Tuesday as wildfire smoke originating more than 2,000 miles away in the western United States and western Canada engulfs nearly two-thirds of the nation.

This means air pollution concentrations within our region may become unhealthy for sensitive groups. These groups include children, the elderly and people suffering from asthma, heart disease or other lung diseases. The effects of air pollution can be minimized by avoiding strenuous activity or exercise outdoors.

A rather thick layer of near-surface smoke was present Tuesday morning to our north over parts of upstate New York, and this was headed southward toward our area. 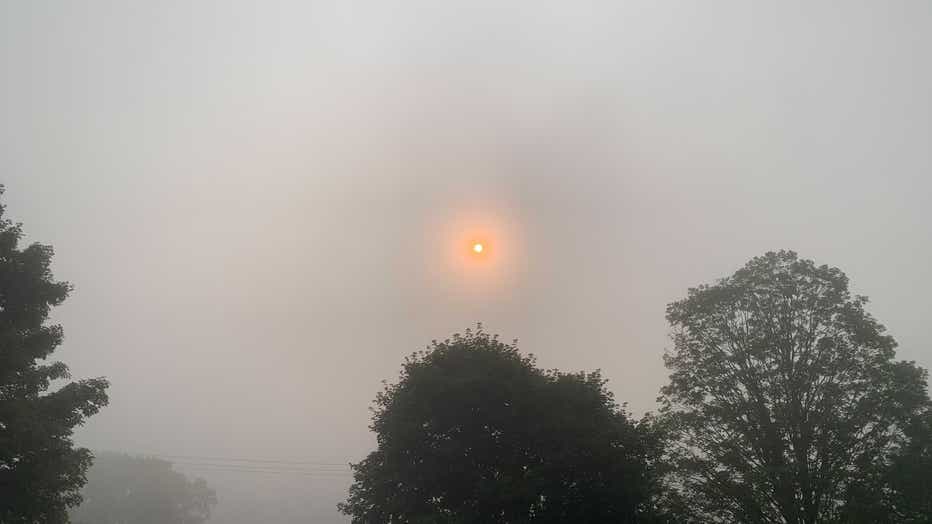 The highest concentrations of wildfire smoke will likely settle over the Delaware Valley from late Tuesday afternoon into Wednesday morning before some if it gets cleared away by a weak cold front late in the day Wednesday.

Some local residents already noticed a smoky sunset Monday evening and a hazy sunrise Tuesday morning. Tuesday's sunset and Wednesday's sunrise are expected to be even more vibrant with increased smoke and haze in the air.

The result is the vivid red or orange sunrise or sunset that causes you to rush outside and snap a photo.

The National Weather Service office in Binghamton, New York, noted Tuesday morning that it's not unusual for Western wildfire smoke to drift into the northeastern U.S., but it is rare to have it mixing down to the ground and having a negative effect on air quality.

Areas of smoke were even observed Tuesday well across the Atlantic Ocean, nearly all the way to Europe.