PHILADELPHIA - The remnants of Ida are expected to bring heavy rain to the area on Wednesday and Thursday after the storm left a wake of damage in Louisiana and Mississippi earlier this week.

Ida weakened to a Tropical Storm Monday morning after knocking out power to the entire city of New Orleans. Rescuers spent Monday in boats and helicopters trying to reach people trapped by floodwaters, while utility crews worked to restore power.

Louisiana communities battered by Hurricane Ida faced a new danger as they began the massive task of clearing debris and repairing damage from the storm: the possibility of weeks without power in the stifling, late-summer heat.

Ida made landfall on the same day 16 years earlier that Hurricane Katrina ravaged Louisiana and Mississippi, and its 150 mph winds tied it for the fifth-strongest hurricane to ever hit the mainland. It was blamed for the death of someone who was hit by a falling tree outside Baton Rouge. Two people were killed and at least 10 others were injured after a roadway collapsed in Mississippi on Monday night. Officials there say they believe the torrential amount of rain in the area following Ida may have caused the roadway to collapse, adding that drivers may not have seen the roadway in front of them was impassable. 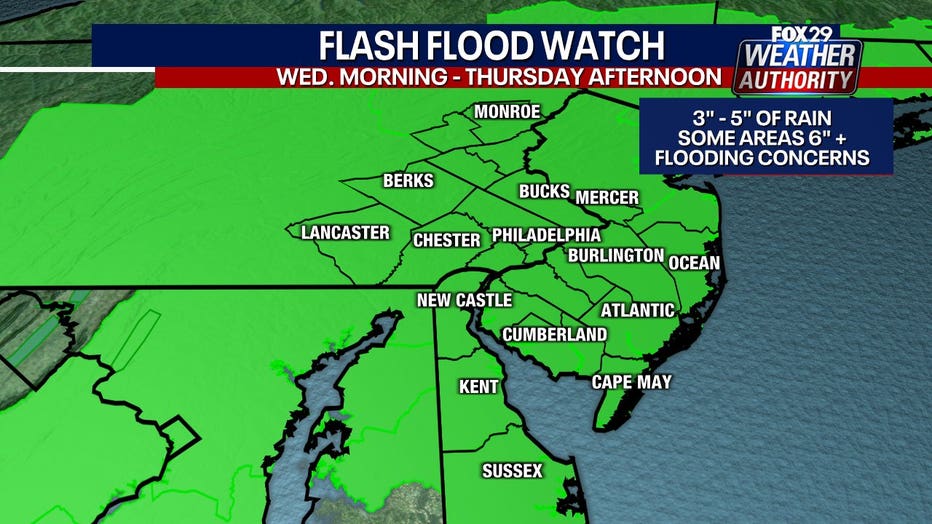 Flash flood watches have been issued for the entire area beginning at 8 a.m. Wednesday morning and lasting through Thursday afternoon.

How much rain will Ida bring to Pennsylvania, New Jersey, and Delaware?

Widespread rainfall totaling 4-6 inches will fall Tuesday night in an area spanning from the southern Poconos, through the Lehigh Valley. The Delaware Valley, Philadelphia, and northern New Jersey are more likely to see 3-4 inches of rain.

Southern New Jersey, Delaware and the eastern shores of Maryland are forecasted to see 2-3 inches of rain, with higher amounts possible in some spots.

This would result in widespread flooding across the region, both of the flashy and longer-duration varieties, with the most severe flooding likely somewhere near or northwest of the I-95 corridor. The heaviest rain is expected to fall in the evening and during the overnight hours. 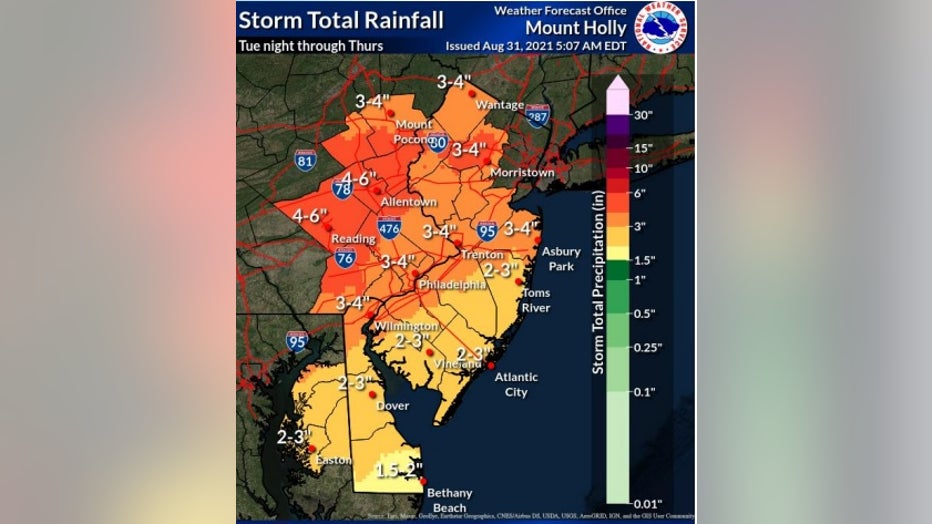 The National Weather Service (NWS) also says significant river flooding is likely for some main stem rivers, creeks, and creeks starting Wednesday afternoon. Impacts will depend on where the heaviest rainfalls and high water levels could possibly last through the weekend.

Severe thunderstorms will also be possible, mainly over southeast New Jersey and parts of Delaware. NWS officials also warn that non-severe storms could result in downed trees, and potentially power outages due to saturated ground.

In most of the area the rain may not begin to taper off until early Thursday afternoon.

"This event has the potential to be quite significant for this area, especially given the wet antecedent conditions in the northern half of the CWA (County Warning Area). Those in flood-prone areas should monitor the latest forecasts and prepare for potentially significant flooding," the National Weather Service said Tuesday morning.

For the latest on Ida's path and its impact on the area, download the FOX 29 Weather Authority app.