TAMPA, Fla. - After Tropical Storm Laura formed in the Atlantic Friday morning, all eyes have been on Tropical Depression 14, which has been swirling over the Caribbean. By Friday night, Tropical Storm Marco had formed.

Marco is the 12th named storm of the season.

On Friday morning, Laura's center was found 80 miles south of where it was originally estimated, causing its track to shift south and west of Florida as of the 5 p.m. update.

Most of Florida is now out of both Laura and Marco's cones, but the National Hurricane Center says the long-range track is uncertain since Laura still has to move either near or over portions of the Greater Antilles through Monday.

RELATED: Could there be two hurricanes in the Gulf? If so, it would be a first

There is a chance the storms could merge over the Gulf, with the stronger of the two absorbing the weaker storm, however, meteorologists say this would not create an even stronger storm.

If that happens, it would be the first time two hurricanes were in the Gulf at the same time, FOX 13's meteorologist Jim Weber says, going back to the start of record-keeping in 1851. 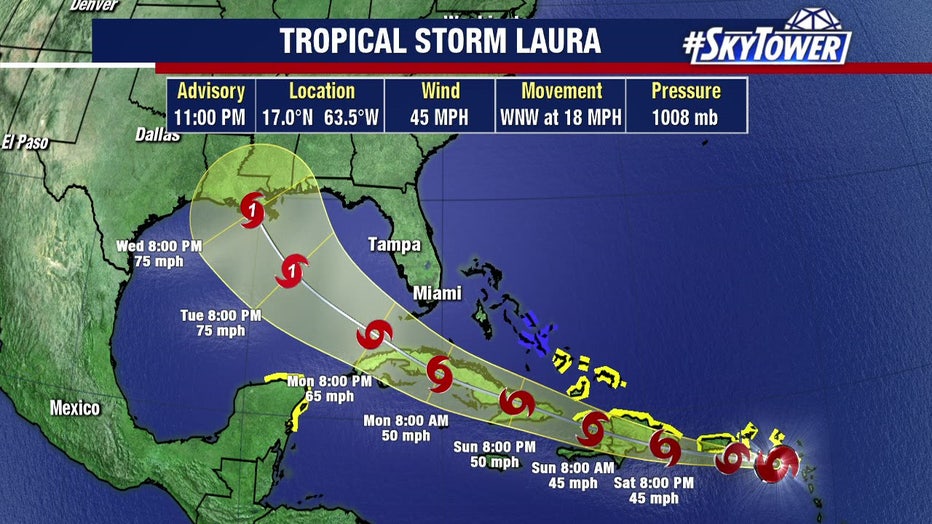 "Everyone is wondering what exactly could happen with this. Could we merge these together and get one giant hurricane? Well that doesn't happen," Weber said. "When you have one that's much stronger than the other, it tends to absorb the weaker one. If they're both around the same strength, they'll move around each other. It's called the Fujiwhara Effect."