PHILADELPHIA - A new InsiderAdvantage/FOX 29 Philadelphia poll shows Dr. Mehmet Oz in the lead by a narrow margin in a tight race for the Republican nomination for U.S. Senate.

The poll, which surveyed 750 likely GOP Primary voters, shows just how tight the race is between the top three candidates.

Oz leads the race followed closely by Kathy Barnette, who moved into second place after the debate on April 25, according to InsiderAdvantage.

Candidates Jeff Bartos and Carla Sands are nearly tied at 4.9% and 4.7%, respectively, while George Bochetto and Sean Gale are tied at 1.3%.

According to the survey data, 25.9% are still undecided ahead of the May 17 primary.

InsiderAdvantage Chairman Matt Towery says the results signal a close race. "Mehmet Oz leads, with Kathy Barnette moving into second place following the most recent debate. Dave McCormick is in a very close third, with all three candidates being close to or within the poll’s margin of error," he said. 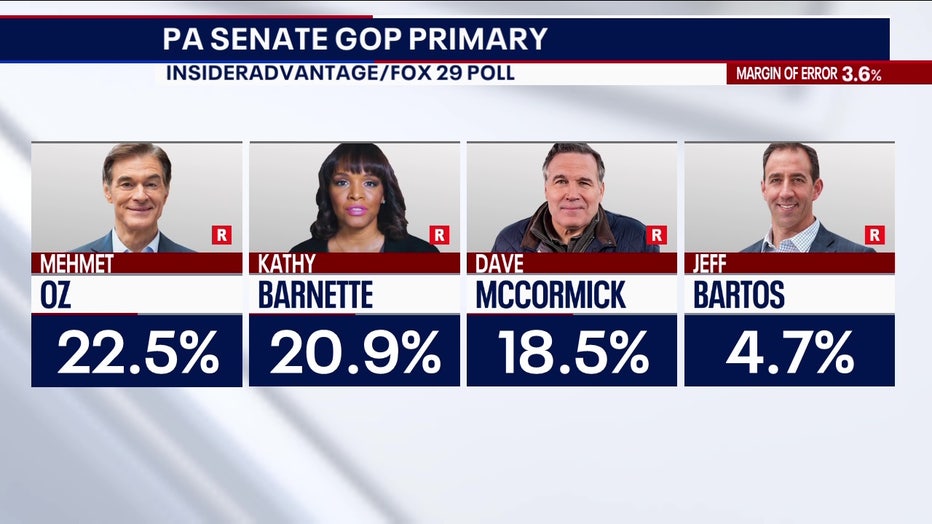 He says none of the top three candidates should be counted out.

"It remains to be seen if Barnette’s move into second place will have continued momentum. And McCormick has shown an ability to move votes with the sheer volume of his paid advertising," Towery said. "At this point, I would not write any of the three top candidates off."

Additionally, former President Donald Trump could have an effect on the election, according to Towery.

Citing a phenomenon titled the "Trump Bump," which he says played a role in the Ohio primary, accounted for between a 3% to 5% increase in support for JD Vance, who was endorsed by Trump.

According to InsiderAdvantage, Trump has a favorability rating higher than 70% among republicans in the state of Pennsylvania.

In April, Oz was endorsed by Trump and the Senate candidate could potentially see a wider gap between himself and Barnette.

"At this point it is fair to say that Oz leads the race, Barnette enjoys a shift in momentum, and that McCormick has the resources and a level of support to stage a comeback."