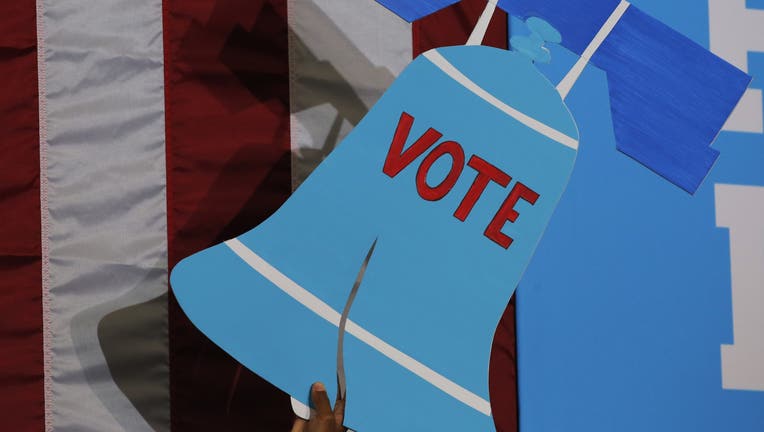 A sign in the shape of the Liberty Bell reading "Vote" is seen before Democratic presidential nominee Hillary Clinton arrives at a voter registration rally, August 16, 2016, in Philadelphia, Pennsylvania. (Photo credit should read DOMINICK REUTER/AFP

PHILADELPHIA - While the 2020 Presidential race will certainly be the highlight of Election Day in Pennsylvania on Nov. 3, a number of statewide races and local congressional races will also be watched closely.

In Philadelphia, voters will also have the opportunity to vote on four ballot measures. The city also opened 17 satellite election offices that offer a number of services to voters.

Experts say the Keystone State continues to change and has increasingly become known as a key battleground ahead of the 2020 presidential election.

Pennsylvania’s swing-state status, along with its ability to award 20 electoral votes of the 270 needed to win the presidency, has brought the state a great deal of attention during 2020's election cycle.

Here is what you need to know ahead of Election Day:

Polls will be open for in-person voting from 7 a.m. to 8 p.m. on Tuesday, Nov. 3. Meanwhile, mail-in or civilian absentee ballots must be postmarked by 8 p.m. Nov. 3. Mailed ballots must be received before 5 p.m. Nov. 6 by your county election office.

Mail-in and civilian absentee ballots can also be returned to your county board of elections office or other designated location or drop-box by 8 p.m. Nov. 3.

Note: In September, the Pennsylvania Supreme Court ruled Howie Hawkins, the Green Party's candidate for president, did not strictly follow procedures for getting on Pennsylvania's ballot in the November election and cannot appear on it.

You can find out more about any of the candidates listed above at Ballotpedia.org.

Philadelphia voters will have the opportunity to vote on four measures, including a controversial stop-and-frisk amendment, and an amendment regarding the Citizens Police Oversight Commission.

The first ballot measure would add language to the Philadelphia City Charter that calls on police to "eliminate the practice of unconstitutional stop and frisk, consistent with judicial precedent, meaning an officer must have reasonable suspicion that a person is engaged in criminal activity in order to stop that person, and, therefore, an officer cannot stop someone unlawfully because of their race, ethnicity, gender, sexuality, religious affiliation or expression, or other protected characteristic."

The second measure would create an Office of the Victim Advocate, "to advocate for crime victims and to work with victim-services providers to coordinate, plan, train, educate, and investigate issues relating to crime victims?

The third measure would create a Citizens Police Oversight Commission (CPOC), which would replace the Police Advisory Commission created by Philadelphia Mayor Jim Kenney in a 2017 executive order. The measure would also authorize City council to "determine composition, powers and duties of the Commission."

The fourth measure would issue $134 million "to be spent for and toward capital purposes as follows: Transit; Streets and Sanitation; Municipal Buildings; Parks, Recreation and Museums; and Economic and Community Development."

You can find out more information about the Philadelphia Ballot measures, here.