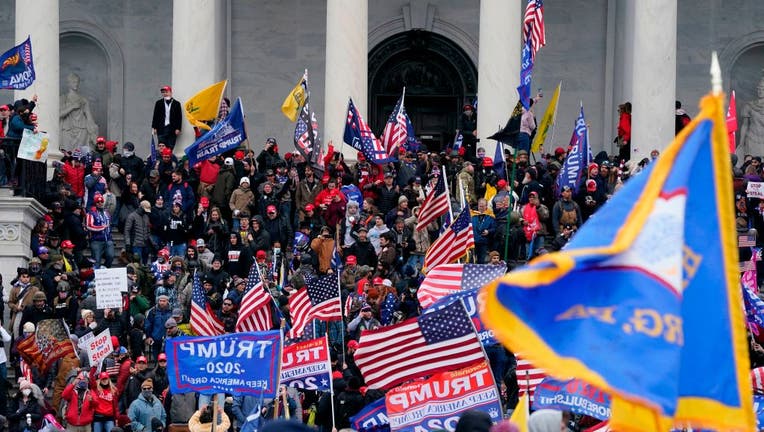 TOPSHOT - Supporters of US President Donald Trump protest outside the US Capitol on January 6, 2021, in Washington, DC. - Demonstrators breeched security and entered the Capitol as Congress debated the a 2020 presidential election Electoral Vote Cert

PHILADELPHIA - Two men arrested in November after they traveled to the Philadelphia convention center where votes in the 2020 presidential race were being counted were sent back to jail after their bail was increased due to their participation in the rally near the U.S. Capitol that turned deadly earlier this month.

The Philadelphia Inquirer reports that no evidence was presented during Friday's combative hearing that 42-year-old Joshua Macias and 61-year-old Antonio LaMotta entered the Capitol building along with thousands of violent supporters of former President Donald Trump battled with law enforcement and ransacked offices.

But prosecutors presented video evidence that the two men were on the Capitol grounds and argued they violated their previous bail conditions. Common Pleas Court Judge Crystal Bryant-Powell increased the $750,000 bail previously set for both men, adding $100,000 to Macias and $15,000 to LaMotta. The judge ordered them jailed until they pay 10% of the new increases. Court records Sunday listed both as still confined.

Defense attorneys argued that their clients broke no laws just by being on the Capitol grounds and pointed out that they have not been arrested by federal authorities. A prosecutor, seeking revocation of their bail, argued that they had traveled to Washington to help incite the riot.

Both Virginia residents men were previously charged with weapons violations for guns they were carrying as they walked to the convention center in the early morning hours of Nov. 5. Prosecutors allege that they traveled to the city in a Hummer adorned with a QAnon sticker and packed with an AR-15-style rifle, ammunition and other weapons.

Weapons counts against Macias were later dropped because he is licensed to carry a gun in Virginia, although prosecutors have said they intend to refile them. Prosecutors also later added election fraud charges, and both defendants are now charged with interfering with an election, conspiracy and hindering performance of duty.

At a hearing last week, another judge barred both defendants from attending rallies or using social media while their cases are pending.