A father accused of abducting his two-year-old son on Monday is considered a suspect in the shooting deaths of the boy's mother and grandmother, according to police sources.

PHILADELPHIA - An Amber Alert was issued for a two-year-old boy after Philadelphia police responded to the scene of a shooting on North 8th Street in the city's Olney neighborhood Monday morning.

Upon arrival, police found a 25-year-old woman had been fatally shot inside the home and her two-year-old son was unaccounted for.

Pennsylvania Police issued an Amber Alert for the child a short time later, saying that the boy was believed to have been abducted by his father, 28-year-old Byron McDonald II. 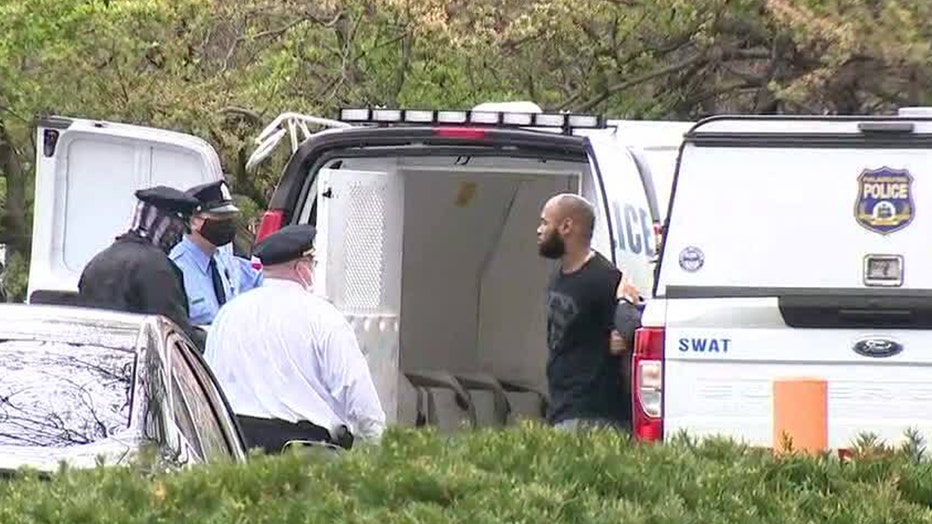 Byron McDonald II, 28, is loaded into a police van after surrendering to police at a South Philadelphia hotel.

The Amber Alert stated that the two were last seen near the 2500 block of Bancroft Street on Friday around 1:30 p.m.

Around the same time on Friday, police say the boy's grandmother, Tamara Aikens, was shot multiple times on the 2500 block of Bancroft Street. She was taken to Temple University Hospital where she later died.

Monday afternoon, police located the red Chevrolet Malibu McDonald was believed to be traveling in behind the Aloft hotel on the 4300 block of Island Avenue after receiving information he had rented a room there.

Police conducted a search of the building and later declared a barricade.

Philadelphia police say negotiators were able to get in touch with McDonald inside the hotel, where he was in a room he was in with his son and a woman who is believed to be the suspect's mother.

McDonald surrendered and was taken into police custody and police recovered his son safely.

A man claiming to be a family member says the little boy is doing okay.

Police sources say McDonald is the suspect in both Friday's shooting, as well as Monday morning's.

FOX 29's Chris O'Connell has learned that when McDonald was 19 years old, he pleaded guilty to third-degree murder for his role in a 2012 shooting death of another 25-year-old woman. He served about a year in prison, sources said.