A Florida company that gained viral attention for selling alien abduction insurance is now selling asteroid insurance just in time for a space rock set to fly by Earth one day before the 2020 election.

RACHEL, Nev. - For $4.5 million you can be the owner of a cattle ranch in the beautiful Nevada desert overlooking the infamous Area 51 military base.

The area along State Route 375 is also home to the "most photographed mailbox in the world," according to the Los Angeles Times.

While most people don’t typically find themselves in rural Nevada, more than 100 miles outside Las Vegas, the mailbox is one of many sites where alien fans flock to in order to snap photos of the mailbox and the state’s 98 mile-long 'Extraterrestrial Highway' signs.

Now the owners of the mailbox are selling the 80-acre cattle ranch as well as a permit to graze 250 cows into Area 51.

The ranch comes with cattle and equipment, according to the property listing.

The Times reported that Steve and Glenda Medlin purchased the property in 1973 when "there was no talk of aliens, and no home mail delivery."

When UFO whistleblower Bob Lazar shared his experience to local news stations of working on an alien spacecraft in the late 1980s, tourists began to flock to the region especially to the nearby town of Rachel, Nevada, now home to the Rachel Bar & Grill which was renamed the Little A’Le’Inn, the Times reports.

"For some reason, Tuesday nights was when they thought the aliens came out. Then it was Wednesdays," the Glenda Medlin told the Times. 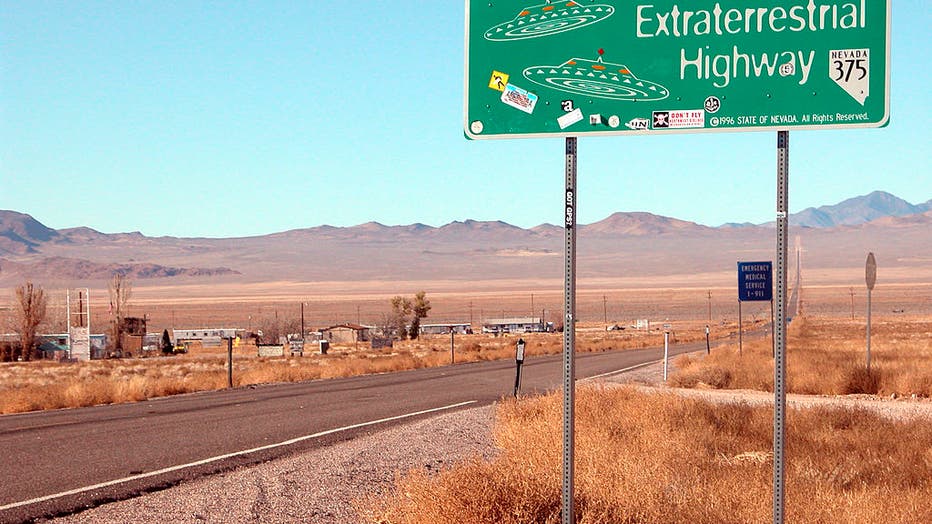 Rachel, NV, On The Extraterrestrial Highway, Highway 375, Home Of Numerous UFO Sightings And Near Area 51.

She said UFO tourists would leave messages in their mailbox and wait "for aliens to abduct them."

The small town of Rachel made headlines in 2019 following a "Storm Area 51" Facebook event that was started as a joke and turned into a full-fledged festival called "AlienStock," prompting the county to declare a state of emergency out of fears that Rachel and its 54 residents would be completely overrun.

RELATED: ‘We didn’t ask for this': ‘Storm Area 51’ event-turned-festival prompts state of emergency in county

Matty Roberts, who created the viral Facebook event, ended up severing ties with the event.

"Due to the lack of infrastructure, poor planning, risk management and blatant disregard for the safety of the expected 10,000+ AlienStock attendees, we decided to pull the plug on the festival," Roberts said in a statement to FOX5.

Now that the craze of events surrounding Area 51 and the possibility of people storming the base is in the past, the land has returned to the quiet place it’s always been where cows graze in solace, next to a massive military complex rumored to house alien craft, all of which can be yours for a whopping $4.5 million.