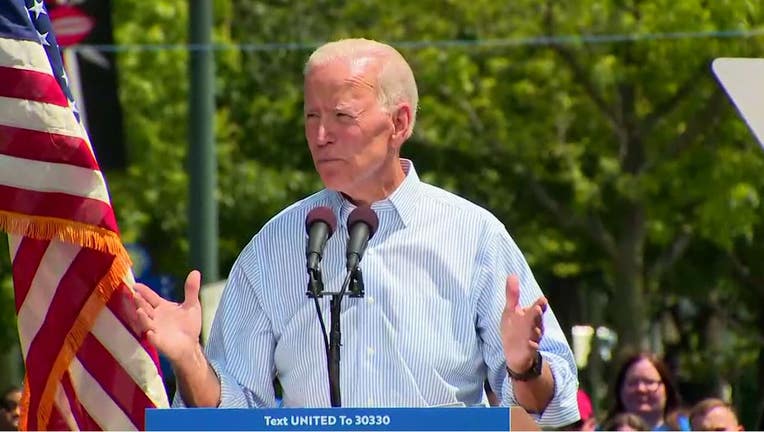 DOVER, Del. - In his third run for the White House, Joe Biden has finally won a presidential primary in his home state.

Sanders and Warren both suspended their campaigns months ago but their names remained on Tuesday’s ballot because they did not officially withdraw as candidates in Delaware by the March 6 deadline. Warren suspended her campaign just one day before the deadline, while Sanders didn’t stop campaigning until April.

Pete Buttigieg and Tom Steyer also had filed for Delaware’s primary but withdrew their names in early March.

Tuesday’s victory gives Biden another notch in his Democratic delegate belt, although the former vice president became his party’s presumptive nominee months ago after Sanders dropped out of the race. Biden then clinched the nomination last month with primary victories in other states.

Biden first ran for president in 1987 but dropped out before the first contests of the 1988 primary campaign amid reports of plagiarism in political speeches and while he was in law school at Syracuse University. Jesse Jackson went on to win Delaware’s Democratic caucus.

Biden also sought the 2008 Democratic presidential nomination but dropped out of the race after finishing fifth in the Iowa caucus with only 1% of the vote. He nevertheless remained on the Democratic primary ballot in Delaware and garnered almost 3% of the vote, well behind future boss Barack Obama and runner-up Hillary Clinton.

The primary elections were open only to registered Democrats and Republicans.

Tuesday’s election was the first in Delaware to feature universal absentee voting, with absentee ballots having been sent to every registered Democrat and Republican in the state. Under Democratic Gov. John Carney’s emergency coronavirus declarations, any voter could choose “sick or temporarily or permanently physically disabled” and be eligible to vote absentee.

Because of the coronavirus, Delaware election officials also limited the number of polling places for Tuesday’s primary. Kent County, with more than 94,000 eligible voters, had only 12 locations where people could cast ballots in person. Sussex County, with more than 133,000 registered Democrats and Republicans, had 24. New Castle County had 46 polling locations available for more than 315,000 voters. In the 2016 presidential primary, Delaware voters cast ballots at 313 precincts.