A baby who was forcibly cut from his mother's womb after she was strangled to death has opened his eyes for the first time, according to family. On Monday, family said baby Yovani opened his eyes while being held by his father. He remained hospitalized in grave condition on life support and was not expected to survive.

CHICAGO - A baby who was forcibly cut from his mother's womb after she was strangled to death has opened his eyes for the first time, according to family.

On Monday, family said baby Yovani opened his eyes while being held by his father. He remained hospitalized in grave condition on life support and was not expected to survive.

Meanwhile, the family was also preparing for the 19-year-old mother's funeral. According to Mount Auburn Funeral Home in the Chicago suburb of Stickney, Marlen Ochoa-Lopez will have a two-day visitation on Thursday and Friday, followed by a funeral and burial service on Saturday.

Two women, 46-year-old Clarisa Figueroa and her 24-year-old daughter Desiree Figueroa, have been charged with first-degree murder for allegedly strangling Ochoa-Lopez and cutting her unborn baby out of her womb last month. 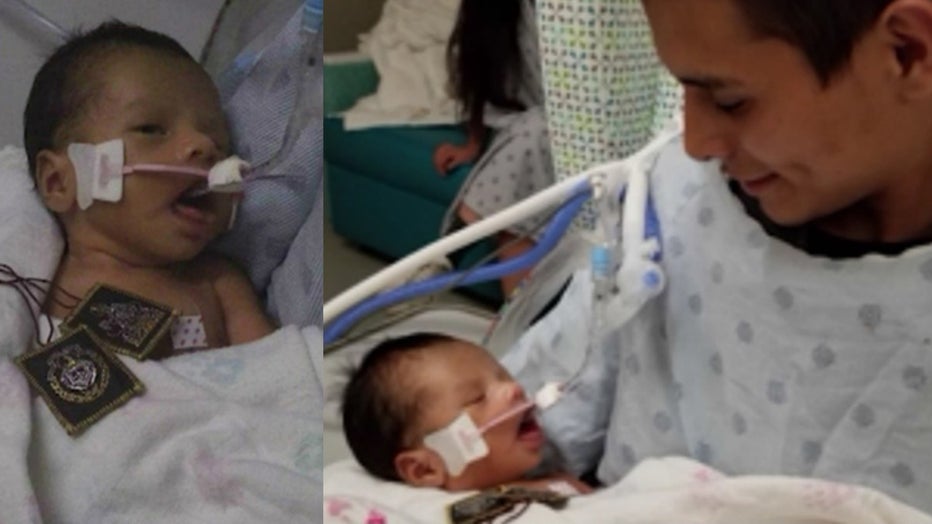 Family said Monday that baby Yovani opened his eyes while being held by his father. He remained hospitalized in grave condition on life support. (Photo credit: Provided images / family)

Clarisa Figueroa then called 911 to report that the baby she had just given birth to was not breathing, according to investigators.

Prosecutors contend that when Figueroa was brought with the baby to the hospital on April 23, she had blood on her upper body and face, which the hospital staff cleaned off and that the 46-year-old Figueroa was examined at the hospital and showed no physical signs of childbirth.

The Cook County Sheriff"s Office said Monday that it wants to know if the suburban Chicago hospital violated state law by not immediately reporting that the woman who claimed to be the mother of a newborn had not given birth.

Cara Smith, chief policy officer at the sheriff's office, said if the state's Department of Family Services determines that Advocate Christ Medical Center violated the Abuse and Neglected Children Reporting Act, there would be an investigation.

The Chicago Police Department and the state agency said over the weekend that the hospital never alerted them after determining in late April that the bloodied Clarisa Figueroa was not the mother.

Ochoa-Lopez's family had been looking for her since she disappeared, organizing search parties and holding news conferences as they pushed police for updates in the investigation.

Police did not connect the mother's disappearance and Clarisa Figueroa until May 7, when friends of Ochoa-Lopez directed detectives to her social media account, which showed she had communicated with Figueroa in a Facebook group for expectant mothers.

The question for the state agency, Smith said, is if the hospital would have been legally required to alert police or the agency about the woman claiming to be the mother of a gravely ill child.

"We will ask DCFS to advise if this unspeakable tragic set of facts was reportable," she said in a statement.

On Monday, Ochoa-Lopez's family also met with staff at the hospital asking about the baby's medical care and questioning whether the facility acted properly in the case.

The hospital issued a statement Monday saying that it was cooperating with local authorities but would have no comment.

"Our thoughts and prayers are with the Ochoa-Lopez family. Our top priority is to provide the safest and highest quality care for the patients and communities we serve. Out of respect for patient privacy and in compliance with federal and state regulations, we are unable to provide comment. We continue to cooperate with local authorities," the statement reads.

Clarisa Figueroa's boyfriend, 40-year-old Piotr Bobak, was charged with the concealment of a homicide. All three suspects were ordered held without bond.