FOX 29's Marcus Espinoza reports on Atilis Gym opening for the 2nd day in a row as one gym visitor gets arrested by police.

BELLMAWR, N.J. - A South Jersey gym reopened again on Tuesday after their actions Monday gained national attention as they defied a state order that shut down nonessential businesses to help stem the spread of the coronavirus.

For the second day in a row people began gathering outside Atilis gym several hours before it opened at 8 a.m.

Bellmawr Police arrived on the scene to speak with the owners of the gym around 10:20 a.m. when they asked the crowd to disperse or they could face charges.

The owners, Ian Smith and Frank Trumbetti, tell FOX 29 they received another summons for a violation of the governor’s orders.

Later in the afternoon, police began citing gym members for violating the order as they exited the gym. FOX 29's Marcus Espinoza reports one person that refused to give their name was arrested at the scene. 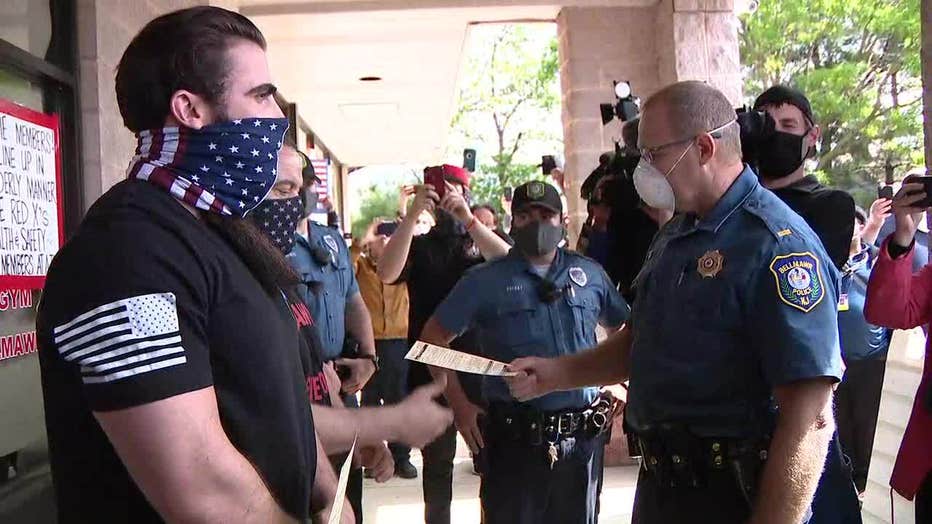 “They are going to have to take other steps to shut us down. We are not shutting down,” co-owner Frank Trumbetti said.

“I promised my wife, I swore to her that the day I open my doors, whether it was because they said I could open my doors or not open my doors, I will not close my doors again unless I’m behind bars and unable to unlock the door,” Trumbetti added. “I guarantee you this door will be open every single day unless you put me behind bars.”

Smith and Trumbetti have said the decision to resume operations at the members-only facility was not about financial gain, but rather a question of Constitutional rights.

“We truly believe that if we don’t do this, in the end, we will have zero rights and no say in what happens,” Trumbetti said in a video posted on the gym’s Facebook page. Trumbetti has said he recently lost a loved one to the coronavirus.

Atilis Gym owners after receiving new summons: ‘We are not shutting down’

"They are going to have to take other steps in order to shut us down," one of the owners of the Atilis Gym in Bellmawr, N.J., said Tuesday, the second day the business defied a government order to remain closed.

On Monday, dozens of people came out to show their support for the gym, with many holding signs critical of Democratic Gov. Phil Murphy and others waving American flags. Only some were wearing face coverings and most people tightly clustered together on the sidewalk and parking area in front of the gym.

“If they shut us down today, we’ll reopen tomorrow,” co-owner Ian Smith told the cheering crowd. The gym then saw a steady stream of customers as the morning progressed.

Around 10:30 a.m., police approached the business and spoke with the gym owners. The officers informed them they were formally in violation of the shutdown order, adding that police were present “only for everybody's safety.” The officers then wished everyone well and told them “have a nice day” before walking away from the gym as the crowd erupted in cheers.

FOX 29's Steve Keeley has the details in Bellmawr.

“They (the officers) actually surprised the hell out of me,” Trumbetti said afterward, noting that they “did their job and upheld their oath ... and know that we are not doing anything wrong. It's about time for every police officer out there to understand we all have rights and, even as a police officer, you don't have to do this. It is unconstitutional. It's that simple. We have the right to work."

Democratic Gov. Phil Murphy said he wasn’t concerned other businesses would begin to follow suit because the state is beginning to take steps to reopen. He did, however, suggest the state might take action if the defiance continues.

“I’m not concerned it will spiral out of control, and we will take action,” Murphy said. “If you show up at that gym again tomorrow, there’s going to be a different reality than showing up today. These aren’t just words. We’ve got to enforce this, but I also don’t want to start World War III.”

In his Tuesday afternoon press conference, Murphy addressed the gym owners’ continued defiance and reaffirmed his stance that gyms are not ready to open.

“We’re not there on gyms. Let me just be unequivocal on that. If we were there we’d be telling you,” the governor said. “It’s indoors, it’s a lot of physical activity, close proximity, not necessarily sedentary… we’re concerned about it.”

Monday, State Police Superintendent Col. Patrick Callahan said the gym’s owners were issued a court summons over the violation of the governor’s shut-down executive order and clients were given a warning.

Speaking outside the gym after the summonses were issued, the gym's owners told supporters that they shouldn’t be concerned because the citations “are going to get thrown out because they’re unconstitutional.” They also rebuked those who criticized police for issuing the summonses, stating “they were only doing their jobs.”

Trumbetti urged other businesses to take similar stands and reopen, but noted the several steps the gym has taken in their efforts to ensure social distancing and protect patrons' safety.

"Make sure you're compliant, you can't just open up and be a rebel,” he said.

Tuesday morning, Trumbetti told FOX 29's Steve Keeley he was "scared" about the renewed warnings from the governor and state police.

"And if you're coming to Atilis to workout today, be prepared to be arrested," Trumbetti said.

Among the precautions the gym owners took were taping off workout stations and operating at 20% of the building’s capacity, meaning about 44 patrons at a time. They also were requiring patrons to wear masks unless they were in the middle of lifting weights.

Gym staff will be taking patrons' temperatures at the door and anyone at 100.4 or above will not be allowed inside. The gym's owners also said it wouldn't allow any new members to join Monday.