PHILADELPHIA - Philadelphia District Attorney Larry Krasner has announced charges against a Philadelphia police officer accused of assaulting three protesters on I-676 back on June 1.

Officer Richard Nicoletti, 35, has been charged with three counts of simple assault, recklessly endangering another person, official oppression, and one count of possession of an instrument of crime.

According to the District Attorney's Office, video evidence and witness statements show Officer Nicoletti assaulting three peaceful protesters with Oleoresin Capsicum spray, or “OC” spray, as they sat on the highway. 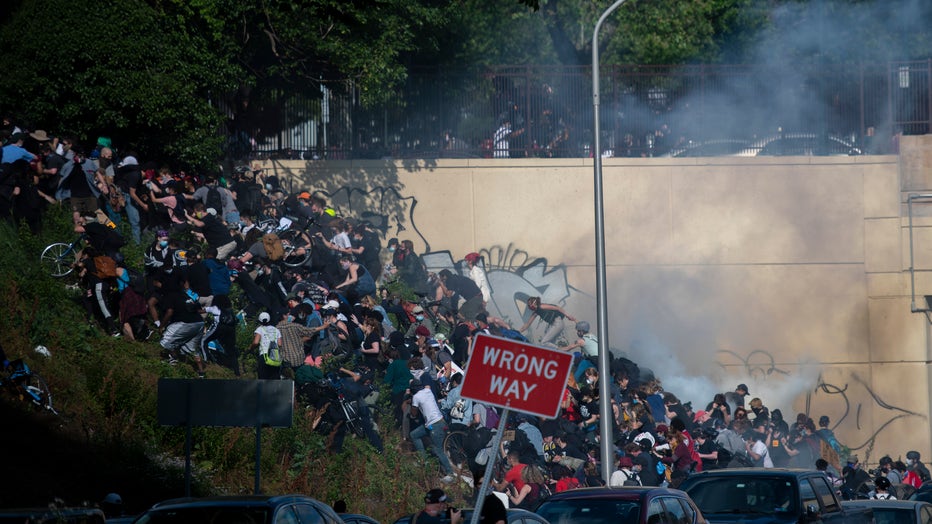 Video of the incident was shared widely in news reports and on social media in the aftermath of the incident in which tear gas was used to disperse protesters as they gathered on the roadway.

City leaders have since apologized to the public after tear gas, bean bags and pepper spray were used against protesters who were trapped on the highway. At the time of their apology, Philadelphia Police Commissioner Danielle Outlaw noted that at least one officer would face discipline in the incidents.

“Thanks to the investigative work of Philadelphia Police Internal Affairs and careful, additional investigation done by the DAO Special Investigations Unit, we are moving forward today with evenhanded justice. Great care has gone into our factual investigation to get the truth. We are also keeping our sworn oath to uphold the Constitution,” District Attorney Krasner said in a statement.

Officials say Nicoletti was assigned to the Philadelphia SWAT Unit deployed to Center City for protest detail that included state and local officers.

At approximately 5 p.m., the SWAT unit arrived and deployed tear gas to disperse the crowd. As protesters scrambled to get off the highway, one of the canisters landed near three protesters who were seated on the highway. One of them got up, and threw the canister away from the group. Investigators say there is no indication the canister hit an officer or state trooper.

At that time, an officer authorities have identified as Nicoletti was observed carrying an OC spray can and approaching the three protesters.
" Without provocation, Nicoletti sprayed OC in the faces of two of the kneeling protesters. He physically pulled down goggles one of the protesters was wearing for protection, and sprayed her again in the face," according to a release from the DA's office. "Officer Nicoletti proceeded to the third protester, who was sitting hunched over to protect his face with his legs crossed. Officer Nicoletti reached down, grabbed and violently threw the protester onto his back, continually spraying him with OC while he was lying down and standing back up. Unable to see due to the OC spray, the protester swung at the officer, without contact. The protestor was left on his feet in close proximity to moving traffic on the other side of 676, unable to see."

None of the protesters involved in the incident were taken into custody.

"Once again DA Larry Krasner is only charging Philadelphia police officers following the recent unrest in the city. Krasner refuses to hold unlawful protesters accountable, those who set fire and looted our great city…His top priority is to push his anti-police agenda. This double-standard of justice is unacceptable to our brave police officers who work tirelessly to keep our city safe. We will provide an appropriate defense for officer Nicoletti as this process moves forward."

Protester involved in I-676 protest speaks out as officer faces suspension, dismissal

Diamonik Hough was among a group of three protesters who were seated on the roadway when a SWAT officer sprayed them.