Dominican authorities said they were investigating the causes of the three recent deaths.

SANTO DOMINGO, Dominican Republic - Three Americans died within less than a week while staying at the same hotel chain in the Dominican Republic, while other reports surfaced from families of loved ones who died of similar circumstances at various resorts across the Caribbean country.

This, while another woman detailed a vicious, hours-long attack that happened while she was vacationing earlier this year.

Dominican authorities said Wednesday they were investigating the causes of the three recent deaths. Here is what we know about some of the recent cases:

Miranda Schaup-Werner, a 41-year-old psychotherapist from Allentown, Pa., was preparing to dine with her husband, Dan Werner, when she began to feel ill and subsequently died on May 25 at the Luxury Bahia Principe Bouganville hotel in La Romana, operated by Bahia Principe Hotels & Resorts. A family spokesman told WFMZ-TV that she collapsed after getting a drink from the minibar.

"At one point, she was sitting there happily smiling and taking pictures, and the next moment she was in acute pain and called out for Dan and she collapsed," McDonald said. Werner reportedly performed CPR but he and emergency medical responders were unable to revive her.

The Dominican Republic's prosecutor's office said forensics experts have taken samples and are performing toxicological and other tests to determine her cause of death.

Five days later, a Maryland couple was found dead at Grand Bahia Principe La Romana, a resort also operated by Bahia Principe Hotels & Resorts in the same area. Edward Holmes, 63, and Cynthia Day, 49, were found unresponsive in their room by a resort employee who went in after they failed to check out. The engaged couple appeared to have suffered respiratory failure and fluid in the lungs. According to a statement issued by the resort, there were no signs of violence.

On May 27, the couple had shared photos and messages on their Facebook accounts in which they appeared to be enjoying their vacation. Coincidentally, the pair had arrived the same day Schaup-Werner passed away.

The Regional Institute of Forensic Sciences said further tests are required to determine more about the couple's cause of death.

The U.S. State Department on Tuesday issued a statement to Fox News confirming the three American deaths, which read in part:

"We offer our sincerest condolences to the families for their loss. The U.S. Embassy is actively monitoring the investigations by Dominican authorities into these tragic deaths. We stand ready to provide assistance as requested... The U.S. Department of State and our embassies and consulates abroad have no greater responsibility than the protection of U.S. citizens overseas. Out of respect to the family during this difficult time, we have no further comment."

Bahia Principe Hotels & Resorts also issued a statement regarding the three deaths at its resorts in an effort to clarify information circulating online, which read in part:

“These two events took place in two different hotels. The case of Mr. Holmes and Ms. Day remains under investigation by the authorities with the results of toxicology and histopathological tests still pending, thus the cause of death has not been determined. We disapprove of any speculation and conjecture on the possible causes of death and urge all to respect the families while the investigation is ongoing.”

The company added, “To date, there are no indications of any correlation between these two unfortunate incidents. In both circumstances, established security protocols were followed, and we have maintained open communication with the authorities to provide information and clarification for each case.”

The company said it has the largest number of rooms in the Dominican Republic, accommodating approximately 700,00 guests per year.

“We hold some of the most prestigious certifications within the tourism industry,” the company said, citing its Travelife Gold certification in which hospitality brands must meet a stringent list of 163 environmental and social criteria.

In a third case in the Dominican Republic, police were investigating an attack on a U.S. tourist in Punta Cana that the Delaware woman recently made public on Facebook. While vacationing in late January with her husband and another couple at the Majestic Elegance Punta Cana hotel, Tammy Lawrence-Daley said she was brutally beaten for eight hours.

In a Facebook post, she recounted being assaulted by a man dressed like a hotel employee in a basement before he left her for dead. She posted photos of her bruised and swollen face on Facebook.

“Now that I’ve had some time to heal, it’s time to tell my story in the hopes that women will be more aware, and hopefully prevent what happened to me,” she said.

Majestic Resorts said in a statement that Lawrence-Daley received all necessary attention and care following the “unfortunate incident.”

The resort corroborated some of the details of the experience she described in her Facebook post, but claimed that while Lawrence-Daley "had bruises on her face and had broken the nail of her little finger,” she had “no scratches or other signs of violence on her body and still had her purse and cell phone with her," a statement from the hotel said.

According to the statement: "A member of the hotel staff stayed most of the time in the hospital to provide assistance and ensure that her needs were met. Majestic Resorts paid for all hospital expenses and offered Mrs. Lawrence, her husband and her fellow travelers a complimentary extension of their stay at the hotel for all the time necessary to recover and arrange their departure from the country."

The statement went on to question Lawrence-Daley's story and motives in filing a lawsuit against the hotel seeking damages. "After their investigation, authorities understand that the scenario is still unclear, and that there are weak points and unanswered questions to answer in this strange and unusual case," the statement said. 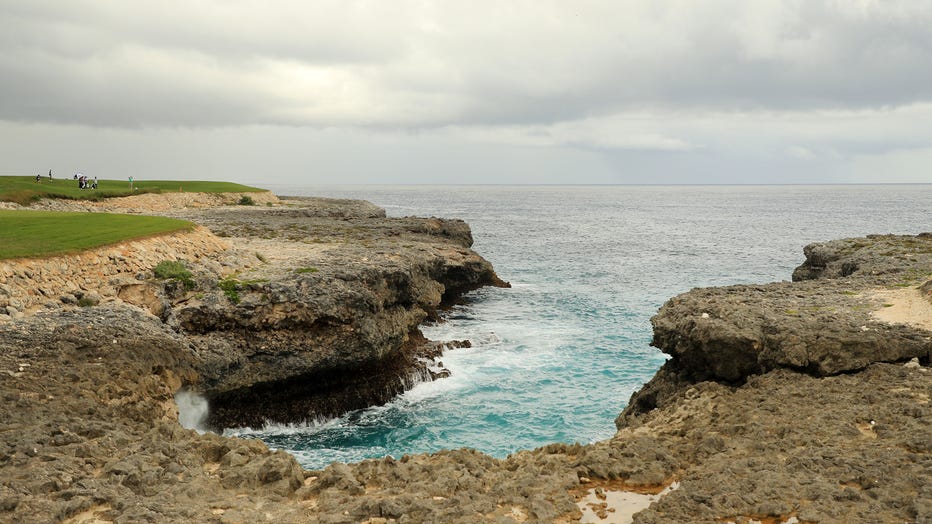 Golfers tee off in this file photo take on March 29, 2019 in Punta Cana, Dominican Republic. (Photo by Mike Ehrmann/Getty Images)

Yvette Monique Sport, 51, died in June of 2018, according to her death certificate. “Heart attack” is listed as the cause.

"She was 51 years of age, relatively healthy, no reason for her to go on vacation and die so suddenly," her sister, Felecia Nieves, said.

Nieves said her sister had just arrived at a Bahia Principe resort in Punta Cana. According to Nieves, she had a drink from the minibar inside her hotel room, went to bed and never woke up. Sport was in Punta Cana with her fiancé, Howard Taltoan, and their friends.

Dominican Republic officials concluded that she died of natural causes.

"We were promised within three months that we would receive a toxicology report. To this day, which is almost a year now, we’ve got nothing," Nieves said.

Similarly, a widow was preparing to mark the the one-year anniversary of her husband's death on July 14 in the Dominican Republic, but said she canceled a planned trip because she was shocked to hear about the recent deaths of three other Americans.

Dawn McCoy said her husband David Harrison, who was just 45 when he died, was in good health, but after feeling sick one night while vacationing at a differently-owned resort in the Dominican Republic, he woke up early in the morning unable to breathe.

McCoy said she called repeatedly for an ambulance to their hotel, but said they would only call for a doctor and it took more than 20 minutes.

“The hotel doctor costed almost $3,000 and they would not let us check out until I paid that,” said McCoy. “It’s like a scab reopened.”

In an ironic twist, McCoy went to the same high school as Cynthia Day, but said they hadn’t spoken in years.

A Colorado couple who stayed in June 2018 at the Grand Bahia Principe La Romana resort cut their trip short after they became sick, according to KMGH in Denver. Kaylynn Knull and her boyfriend, Tom Schwander, said their trouble began after they decided not to buy a timeshare at the resort.

"As soon as we came back to the room, we noticed it smelled like somebody had dumped paint everywhere," Knull told the station. "We were drooling excessively. My eyes would not stop watering."

They first changed rooms, and later booked a flight home. A doctor said their illness had likely been “Organophosphate poisoning,” a reference to pesticides, according to the station.

Knull told KMGH she believes the pesticides were being used on the plants all over the resort.

In response to the claims by the Colorado couple and the family of Yvette Monique Sport, Bahia Principe Hotels & Resorts issued a statement on Friday, which reads in part:

“In regards to the two unfortunate events that took place in the Dominican Republic, and after inaccurate and false information has been spread or circulated of by various media, digital platforms and social networks, Bahia Principe Hotels & Resorts would like to express our deep respect to the authorities and the ongoing investigations. We reiterate our firm commitment to collaborating completely with the authorities and hope for a prompt resolution of their inquiries and actions and will not be making any further statements that may interfere with them.”

“As a result of the misinformation that has been published, which we wholeheartedly disagree with, Bahia Principe Hotels & Resorts has suffered great damage to its image and reputation. Serious insults and threats have been levied on some of our more than 15,000 employees and their families, who are the backbone of our company and before whom we cannot stand idle on the sidelines.”

"The safety and comfort of our guests and staff stand at the core of our company values, and we work daily to ensure it," the statement added.

Tourism to the Dominican Republic

More than 6 million tourists visit the Dominican Republic each year, an important source of revenue for the country.

“The development of a professional tourist police corps, institution of a 911 system in many parts of the country, and a concentration of resources in resort areas means these tend to be better policed than urban areas like Santo Domingo,” it said. “The wide availability of weapons, the use and trade of illicit drugs, and a weak criminal justice system contribute to the high level of criminality on the broader scale.”

Robin Bernstein, the ambassador of the United States to the Dominican Republic, told Univision that recent high-profile incidents involving American tourists in the Caribbean island nation were isolated cases.

The ambassador added that the embassy was closely following the investigations and working with local authorities to bring to light what happened.