WASHINGTON - President Joe Biden’s nominees for health secretary and head of the Interior Department are facing Senate confirmation hearings this week. Both picks would be historic if confirmed.

Xavier Becerra, now attorney general of California, told senators on the health committee Tuesday that tackling the coronavirus pandemic will be his first priority if confirmed, but he also pledged to work to expand health insurance coverage, curb prescription drug costs and reduce racial and ethnic disparities in medical care. On Wednesday, he’ll appear before the Finance Committee — which will vote on sending Becerra's nomination to the Senate floor.

Meanwhile, Deb Haaland, a New Mexico congresswoman named to lead the Interior Department, looked to rebut criticism from some Republicans who have complained that her opposition to drilling on federal lands will cost thousands of jobs and harm economies throughout the West.

If confirmed, she would be the first Native American to lead a Cabinet agency. 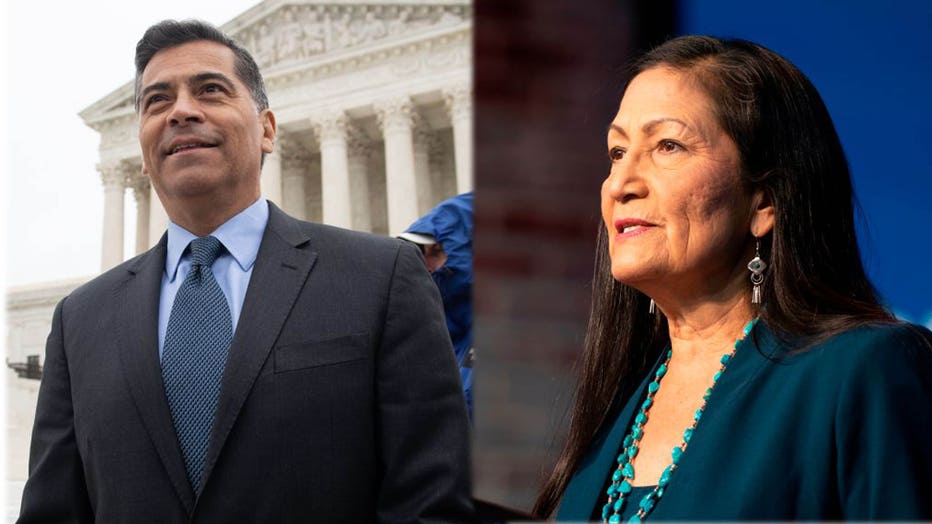 Becerra, 63, would lead the HHS, a $1.4 trillion agency with a broad portfolio that includes health insurance programs, drug safety and approvals, advanced medical research and the welfare of children. Republicans are portraying the Californian as unfit, but Democrats are unfazed, accusing the GOP of playing politics despite the coronavirus pandemic.

On health insurance, Becerra pledged to work to expand the Obama-era Affordable Care Act, although in the past he's supported a government-run health care system.

Becerra represented Hispanic neighborhoods of Los Angeles in the U.S. House for more than 20 years before becoming his state's chief law enforcement officer, succeeding Vice President Kamala Harris after she won election to the Senate. His politics are liberal but his style is low-key and oriented toward problem-solving. As a congressman, he played a behind-the-scenes role steering President Barack Obama's health care law through Democratic divisions in the House.

"I’m not sold yet," Burr said, looking at the nominee. "I'm not sure that you have the necessary experience or skill to do this job at this moment." In his opening statement, Burr questioned whether Becerra respects the role private companies, and particularly pharmaceutical firms, play in delivering innovation that benefits patients.

Republicans have said Becerra is a radical supporter of socialized medicine, abortion and curbs on religious liberty and that he has no medical experience. But Democrats are shrugging it off.

Republicans are "just flailing around," Finance Committee Chairman Ron Wyden of Oregon said Monday. "They've done their best to try to find something that could stick in terms of their opposition, but there’s no ‘there’ there."

Haaland, Biden’s other Cabinet pick who appeared before the Senate Committee on Energy and Natural Resources, has pledged that oil and natural gas will continue to play a major role in America for years to come — even as the Biden administration seeks to conserve public lands and address climate change.

Haaland said she aims to "strike the right balance" as the agency manages energy development and seeks to restore and protect the nation's sprawling federal lands.

Biden's agenda, including the possible creation of a Civilian Climate Corps, "demonstrates that America’s public lands can and should be engines for clean energy production" and "has the potential to spur job creation," Haaland said in testimony prepared for her confirmation hearing.

Haaland, 60, is a Laguna Pueblo member and two-term congresswoman. She often draws on her experience as a single mother and the teachings of her ancestors as a reminder that action the U.S. takes on climate change, the environment and sacred sites will affect generations to come.

Native Americans see Haaland’s nomination as the best chance to move from consultation on tribal issues to consent and to put more land into the hands of tribal nations either outright or through stewardship agreements. The Interior Department has broad oversight of tribal affairs and energy development.

"The historic nature of my confirmation is not lost on me, but I will say that it is not about me," Haaland said in her prepared testimony. "Rather, I hope this nomination would be an inspiration for Americans — moving forward together as one nation and creating opportunities for all of us."

Haaland pledged to lead the Interior Department with honor and integrity and said she will be "a fierce advocate for our public lands."

She promised to listen to and work with members of Congress on both sides of the aisle and ensure that the Interior Department's decisions are based on science. She also vowed to "honor the sovereignty of tribal nations and recognize their part in America’s story."

But her nomination has stirred strong opposition from some Republicans who say her "radical ideas" don’t fit in with a rural way of life, particularly in the West. They cite her support for the Green New Deal and Biden’s recent moratorium on oil and gas drilling on federal lands — which doesn’t apply to tribal lands — and her opposition to fracking and the Keystone XL oil pipeline.

Sen. Steve Daines, R-Mont., said Haaland will have to convince him she's willing to break from what he called her "radical views" as a lawmaker, including opposition to the oil industry and to the lifting of federal protections for grizzly bears.

"Her record speaks for itself. She’s a die-hard, far-left ideologue," Daines said in an interview.

Some Native American advocates called the description of Haaland as "radical" a loaded reference to her tribal status.

"That kind of language is sort of a dog whistle for certain folks that see somebody who is an Indigenous woman potentially being in a position of power," said Ta’jin Perez with the group Western Native Voice. "Folks to some degree are afraid of change."

Daines called the notion of racial overtones in his remarks outrageous.

He is a member of the Senate Energy and Natural Resources Committee, which will consider Haaland's nomination at the hearing Tuesday. The panel's chair, Sen. Joe Manchin, D-W.Va., has not said how he will vote on Haaland's nomination, which Democrats generally support. Manchin, a moderate, said he plans to oppose Biden's choice for budget director, Neera Tanden, a crucial defection that could sink her nomination in the evenly divided Senate.