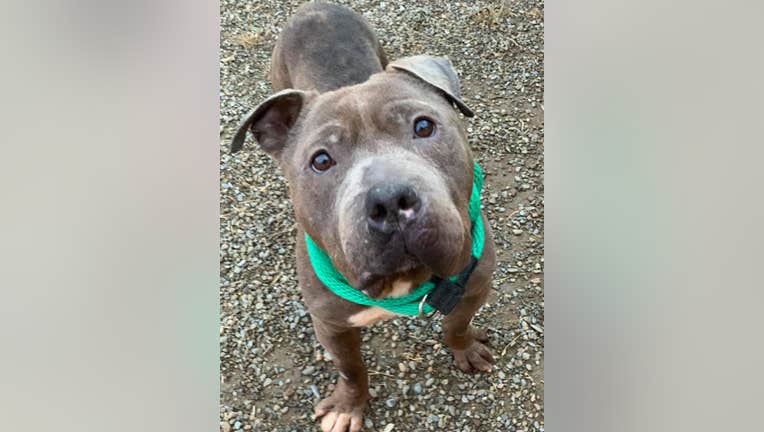 PHILADELPHIA - ACCT Philly — the city’s only open-intake animal shelter — is searching for a dog named Max who is missing from its facility.

On Dec. 3, staff reported that the gray pit bull type dog was not in his kennel, according to the shelter. Management confirmed that Max was not in the building, though the shelter's computer system showed otherwise. Max was last seen on the premises on Dec. 2.

The shelter said it spent days speaking to employees and reviewing security camera footage, but no additional information came to light and Max was not visible in the footage.

"Since then, the possibility that this was a computer database issue has been ruled out," shelter officials said in a statement. "Meaning it is most likely someone took him from the building."

“We are all concerned about Max and just want to make sure that he’s safe,” said Executive Director Aurora Velazquez. "We are of course also reviewing our protocols to make sure this doesn’t ever happen again."

The shelter aims to upgrade its camera system moving forward, but "the priority right now is finding Max," Velazquez said.

Max is described as an older adult dog who weighs between 35 and 40 pounds. He is unneutered and sometimes "wobbles" when he walks. The easygoing dog has a permanently swollen-looking muzzle, and one of his ears is floppier than the other.

The shelter is offering a $4,000 reward for information leading to the confirmation of Max's safety.

On Thursday, ACCT Philly created a "pet amber alert," which sends robocalls to 500 nearby homes in addition to sending flyers to pet-related businesses in the area.

Anyone who has seen Max or has further information is urged to email ACCT Philly at tips@acctphilly.org. The shelter's dedicated tip line also accepts texts and voicemails at 267-209-0789.

The community group "Do Better Philly," which advocates for better conditions on behalf of the city shelter and its animals, has offered its own $3,000 reward for individuals who either know where Max is or who can confirm what happened to him.

"The reward is targeted for individuals with proof of what happened to Max and where he is," the group wrote in a Facebook post. "Not an adopter or a rescue that may have him."

On Friday, Dec. 6, a different dog named Max was found tied to a railing in South Philadelphia days after being adopted from ACCT Philly. The dog in that case is now searching for a forever home while living with his foster family via South Jersey Freedom Ranch.