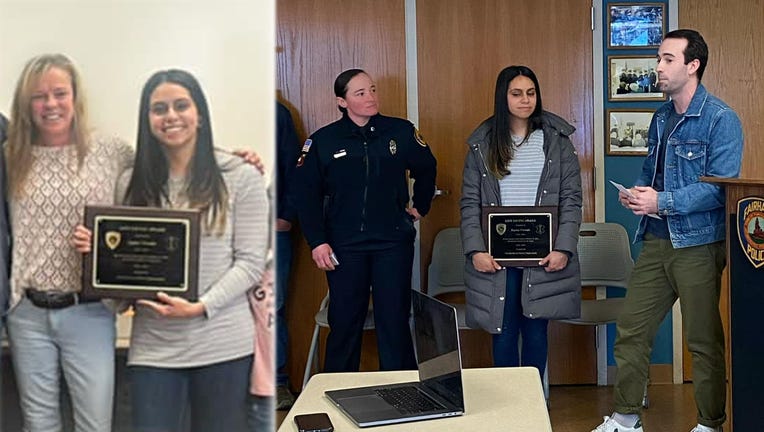 FAIRHAVEN, Mass. - A DoorDash driver in Massachusetts has been hailed a hero and awarded a grant to help continue her education in emergency medicine after being credited with saving a woman’s life while delivering food.

DoorDash driver Sophia Furtado was making her final delivery of the night on Feb. 11 at a home in the town of Fairhaven when she found Caryn Sullivan lying at the bottom of some steps outside of her home. Sullivan was "unconscious, non-responsive, and actively bleeding from her head," police said in a statement.

"Sophia immediately opened the door of the home and yelled to anyone inside. Robert Sullivan immediately came to the door, and was made aware that his wife was on the ground in a dire emergency," Fairhaven Police Officer Jillian Jodoin, an officer who arrived at the scene, said in the statement.

Furtado dialed 911 and spoke to a dispatcher while providing medical aid to Caryn. She also quickly told Robert about what materials she needed, proceeding to wrap Caryn in a blanket and using a towel to apply light direct pressure to the source of the bleed, Jodoin explained.

"While maintaining direct pressure she stabilized Karen to protect her from a possible spinal injury until police units could arrive. This happened on West Island, which is approximately 6 miles from the center of town," she added.

Furtado stayed on the phone with 911 dispatchers until Jodoin and Fairhaven Officer Ryan Benoit got to the home.

"I arrived on scene and Sophia identified herself as someone with an emergency medical background. At that moment Sophia became a part of our team to aid (Caryn). I asked her if it was possible for her to keep stabilizing Karen's neck to keep her spine safe, Her answer was, 'I'm not going anywhere,'" Jodoin recalled.

Police said Furtado had also quickly developed a rapport with Robert and helped streamline information gathering for officers so it could be passed quicker to arriving medics.

A Nest camera captured footage of a DoorDash delivery driver's car roll away after he forgot to put the car in park.

Afterward, Furtado asked the police if she could be updated about Caryn’s condition.

"With permission from the Sullivan family, I updated her with the information I obtained from Karen’s Daughter Veronica the next day," Jodoin explained. "She informed me that her mother went into emergency surgery at 2AM for two severe brain bleeds. At the time I called, she was in unstable condition and the family was waiting for the 24 hour mark after surgery to consider her out of the water."

Caryn spent weeks in the hospital and months rehabbing, according to police. Jodoin added that Caryn’s doctor was "adamant" that she would have succumbed to her injuries had there been any delay in care.

Furtado, who is a mother and part-time DoorDash driver, has dreamed of becoming a professional in emergency medicine but told police that both money and parent duties have pushed those dreams aside.

For her actions that night, she was given a life-saving award from the Fairhaven Police Department in a ceremony on April 20. Furtado also received a $1,000 educational grant from DoorDash, while training institution GMEC-EMT agreed to offer her a discounted rate for their EMT program.

"We are incredibly grateful to Ms. Furtado for stepping in during a critical moment and are relieved that the customer has since safely recovered," a DoorDash spokesperson said in a statement. "Ms. Furtado’s care and quick response were nothing short of heroic and we are honored to have been able to show our appreciation for her tremendous efforts."

Jodoin noted how she found Furtado to be "extremely humble and modest." Caryn Sullivan, who was described as being "so forever grateful" for Furtado’s actions, later invited their family to the Sullivan home for lunch as a thank you."

"As every officer in this room can tell you, what Sophia did that night is not something anyone would just do. We have all worked long enough in this field to have seen people walk away, run away, drive away, pull out their phone, or simply just watch," the police officer said. "Sophia sprung into action, alerted Robert, activated the emergency response system, implemented materials needed, rendered aid, and helped officers streamline information gathering."

"She saved a life," Jodoin added.