PHILADELPHIA - Dueling protests gathered outside the Pennsylvania Convention Center on Thursday amid legal action from the Trump administration to pause vote-counting in Pennsylvania citing a lack of transparency.

Organizers from a group called Freedom Works For America called on all "Patriots" to meet at 1100 Arch Street at 8 a.m. to "make sure Joe Biden does not steal the election."

The pro-Trump movement has drawn several counter-protesters who caught wind of the scheduled demonstration. Both sides began with small crowds occupying the sidewalk in the morning, but have since ballooned in size to cover the street. To this point, both protests have been peaceful. 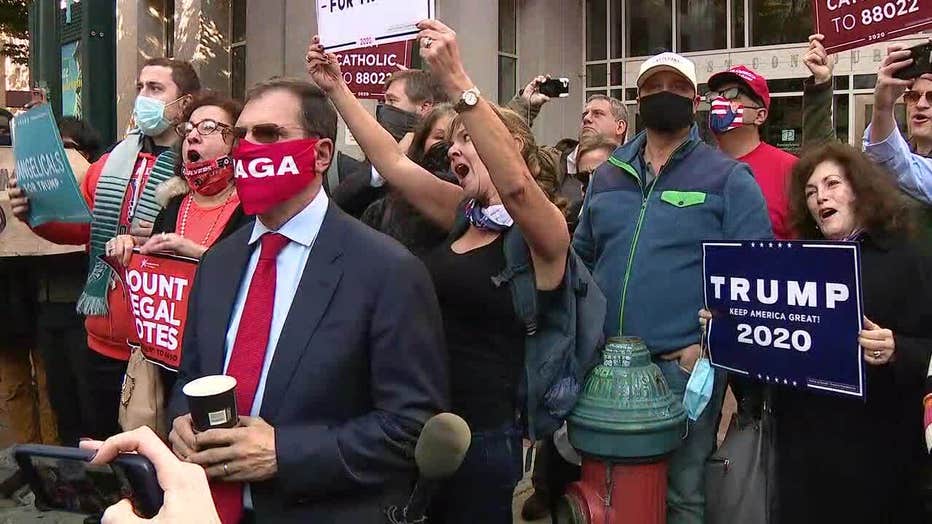 The Trump campaign said it sued to temporarily stop the vote count in Pennsylvania over what it called a lack of transparency, demanding better access for campaign observers. In one lawsuit, it complained one of its representatives was kept so far away that he could not see the writing on mail-in ballots that were being opened and processed in Philadelphia. A judge dismissed it, saying that poll watchers are directed to observe, not audit. The campaign is appealing.

Lisette Tarragano, a Republican poll watcher from Philadelphia, told FOX 29 she had not been allowed to do her job despite having the necessary registration and credentials. Tarragano said she was told her name had not been uploaded by the Pennsylvania Voting Commission. The problem, according to Tarragano, is being experienced by both parties poll watchers.

Tarragano said not being able to see if the ballots are counted properly is "worrisome" and "scary." She claims the canvassers have not been able to stand close enough to check for irregularities.

FOX 29's Steve Keeley is outside the Pennsylvania Convention Center where protesters have started to gather the morning after the Trump campaign filed legal action against the state's ballot count.

In another lawsuit, the Trump campaign disputed the state’s guidance over the timeline for voters to provide proof of identification for a mail-in or absentee ballot that arrives within three days after polls close. 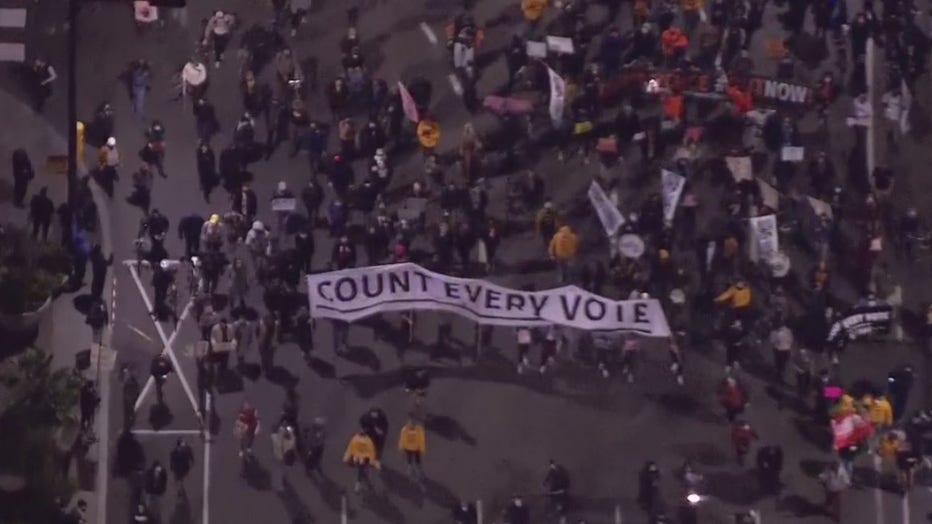 Trump's effort to pause the election has been met with strong resistance in the democratic stronghold of Philadelphia. Protesters hit the streets Wednesday night encouraging election workers to continue counting ballots. Demonstrations, which were mirrored in other cities across the county, remained peaceful.

FOX 29's Steve Keeley is at the Pennsylvania Convention Center where peaceful protests have begun amid a lawsuit by the Trump administration to halt vote counting in Pennsylvania.

Was my vote counted? A state-by-state guide to tracking your absentee ballot

When is the president announced?

2020 election: Here are the House races to watch

The Electoral College: How does it work? Why do we have it? Could it ever change? Here’s what you need know

Here are the Senate races to watch in the 2020 election