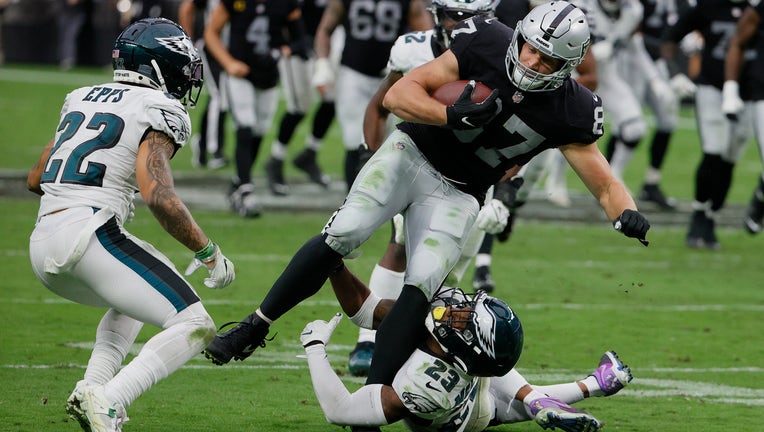 LAS VEGAS, NEVADA - OCTOBER 24: Foster Moreau #87 of the Las Vegas Raiders is tackled by Rodney McLeod #23 of the Philadelphia Eagles during the second half in the game at Allegiant Stadium on October 24, 2021 in Las Vegas, Nevada. (Photo by Ethan Mi

LAS VEGAS - Derek Carr threw for 323 yards, completing 31 of 34 pass attempts with one touchdown, and the Las Vegas Raiders defeated the Philadelphia Eagles, 33-22.

The Raiders (5-2) outgained Philadelphia 443-358 in a dominating performance that saw Las Vegas score on five straight possessions after its first series ended with Carr being intercepted inside the Eagles 5-yard line.

It was Las Vegas’ second straight win since former coach Jon Gruden resigned Oct. 11 because of offensive emails he sent before being hired in 2018.

Under interim coach Rich Bisaccia, the Raiders have outscored Denver and Philadelphia 67-46 collectively, and outgained both 869-779.

The Eagles (2-5) lost their second straight and for the fifth time in six games.

The Raiders were without Carr’s top target, tight end Darren Waller, who was inactive. Las Vegas lost running back Josh Jacobs to a chest injury after he ran for 29 yards on six attempts, including one touchdown.

Stepping up in the Pro Bowlers' places were tight end Foster Moreau, who had a career-high six receptions for 60 yards, and running back Kenyan Drake, who rushed for 69 yards on 14 attempts, including one touchdown.

Prior to Carr’s second red-zone interception of the season, which tied with Patrick Mahomes and Trevor Lawrence for most in NFL, the Eagles marched 62 yards in eight plays on the game’s opening drive. Jalen Hurts found rookie running back Kenneth Gainwell over the middle for a 13-yard score.

Las Vegas scored the first of its points during a 30-0 run on its second possession early in the second quarter. Carr hit Moreau for an 18-yard touchdown. Jacobs added an 8-yard TD when he scampered around the left edge on the Raiders’ next possession.

And while the Raiders’ offensive line was carving out its best performance of the season - it didn’t allow any sacks - Las Vegas’ pass rush continued to haunt quarterbacks. Defensive end Yannick Ngakoue had two sacks, the 12th multi-sack game of his career and second such performance this season.

After its touchdown, the Eagles' next six possessions ended with a punt, punt, fumble, end of the first half, punt and a fumble.

Philadelphia added a late score when Hurts hooked up with Jalen Reagor for a 17-yard touchdown.

Raiders: have their bye next week, and won’t play until Nov. 7 at the New York Giants.