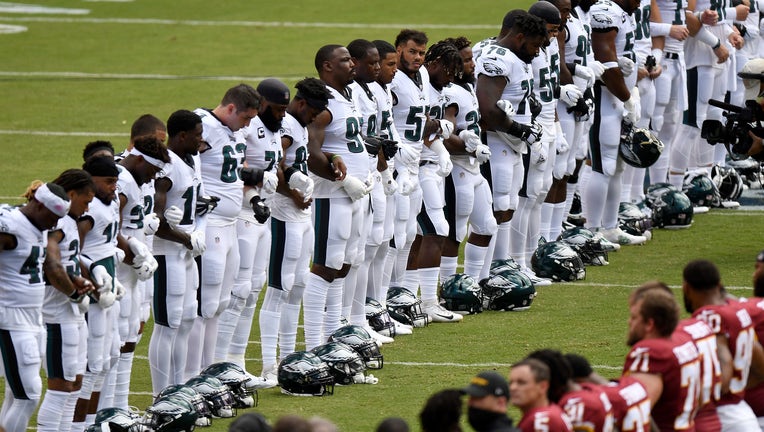 LANDOVER, MD - SEPTEMBER 13: The Washington Football Team and the Philadelphia Eagles stand together on the field before the game at FedExField on September 13, 2020 in Landover, Maryland. (Photo by Greg Fiume/Getty Images)

WASHINGTON - The Philadelphia Eagles are the latest team to remain in the locker room for the National Anthem in protest of racial inequalities and police brutality.

Prior to the National Anthem, players from both the Eagles and Washington locked arms at midfield for a moment of unity as Alicia Key's "Lift Every Voice and Sing" played. Eagles' players returned to the locker room for the anthem, while Washington players knelt before the anthem and stood during it.

The Eagles' are one of several teams around the NFL to leave the field for the anthem.

On Thursday night, in the first game of the 2020 NFL season, the Houston Texans left the field before the national anthem ahead of their game against the Kansas City Chiefs at Arrowhead Stadium.

Packers and Cowboys are also rumored to remain in the locker room during the National Anthem for their week 1 matchups.