AURORA, Colo. - Independent investigators hired to probe the death of Elijah McClain, a 23-year-old Black man in Colorado who died at the hands of police and paramedics in 2019, released their report Monday, criticizing how police handled the entire incident.

The report called the investigation that followed his death "flawed" and offered several policy recommendations.

"Based on our review of the events on August 24, 2019, we make several recommendations to the City for changes in the policies and practices of the Aurora Police Department and Aurora Fire Rescue," the report states. "The recommendations are intended to lessen the chance of another tragedy like this one from happening again."

Three Aurora police officers were involved in stopping McClain as he walked down the street on Aug. 24, 2019, after a 911 caller reported that he looked suspicious. When McClain refused to stop walking, the officers put him in a chokehold and handcuffed him before a paramedic injected McClain with the sedative ketamine. He suffered cardiac arrest and was taken off life support.

McClain had been wearing a ski mask at the time, which he often did while jogging, his family and friends told FOX 31 Denver. He was unarmed when police approached him. 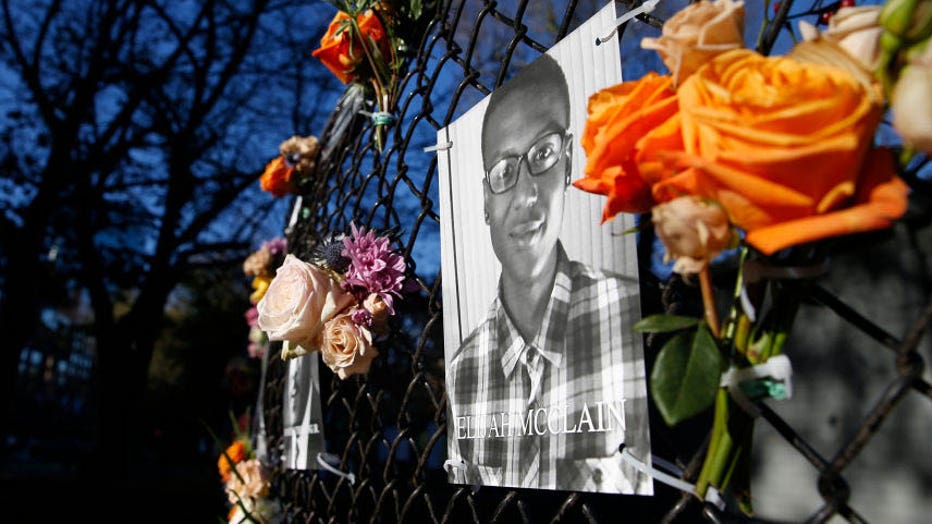 A photograph of Elijah McClain is part of the "Say Their Names" memorial on Boston Common in Boston on Nov. 16, 2020. (Photo by Jessica Rinaldi/The Boston Globe via Getty Images)

The city of Aurora hired a team of three independent investigators during the summer to examine McClain’s August 2019 death and the actions by police, fire officials and paramedics. The team will present their findings to Aurora City Council Monday evening and have published their 157-page report.

"The speed at which these officers acted to take Mr. McClain into custody, their apparent failure to assess whether there was reasonable suspicion that a crime had been committed, and the unity with which the three officers acted suggest several potential training or supervision weaknesses," the report said.

The team of investigators reviewed body cam footage, videotaped statements by the officers, the officers’ follow-up reports, and handwritten notes from personnel on the scene, the initial 911 call, other departmental reports and summaries of the incident, Aurora Police and Fire policies and training materials, patient care reports, and the coroner’s autopsy report.

In the report, the panel recommended increased training for all officers on interactions "with persons in crisis or perceived to be in crisis," in addition to improving training and protocols for 911 dispatchers, and expand and modernize the department’s crisis response unit — among many other recommendations.

The independent report states that it "does not attempt to assign legal responsibility for Mr. McClain’s death or determine his cause of death. Other investigations and litigation are underway for those purposes."

Still, the team called investigation after McClain’s death "flawed" and said it "failed to meaningfully develop a fulsome record."

The Adams County coroner ruled the cause of McClain’s death to be undetermined. In November 2019, District Attorney Dave Young declined to press charges against the officers.

However, Aurora Police officers Erica Marrero, Kyle Dittrich and Jason Rosenblatt were later fired and a fourth, Jaron Jones, resigned after photos leaked of police reenacting a chokehold while standing in front of a memorial to McClain.

Marrero, Dittrich and Jones are shown smiling in one photo taken on Oct. 20, 2019, and in another, Jones has his arm around Dittrich’s neck in a fake neckhold like the one used on McClain.

Rosenblatt initially tried to put McClain in the chokehold but couldn’t because of his position, so Woodyard did, authorities said. The maneuver, called a carotid control hold, restricts the flow of blood to a person’s brain, rendering them unconscious.

It has been banned in several places following the nationwide Black Lives Matter protests against police brutality.

According to a lawsuit the McClain family filed against police and paramedics, Marrero and Dietrich — seen in the photos — were among the officers who arrived after McClain was restrained on the ground.