Sgt. Robert Wilson's sister was among those who spoke out to denounce the defacing of a mural dedicated to her brother.

WEST PHILADELPHIA - A group of Philadelphia officials joined the family of a fallen police office in gathering to denounce the defacing of a mural dedicated to that officer.

Over the weekend, police say a mural of Sgt. Robert Wilson III on the 6000 block of Baltimore Avenue was spray-painted with anti-police messages.

On Tuesday, city leaders including Mayor Jim Kenney, Commissioner Danielle Outlaw, and State Senator Anthony Williams hosted a press conference to denounce the vandalism. Other speakers include members of Wilson's family and leaders within the West Philadelphia neighborhood where Wilson grew up. 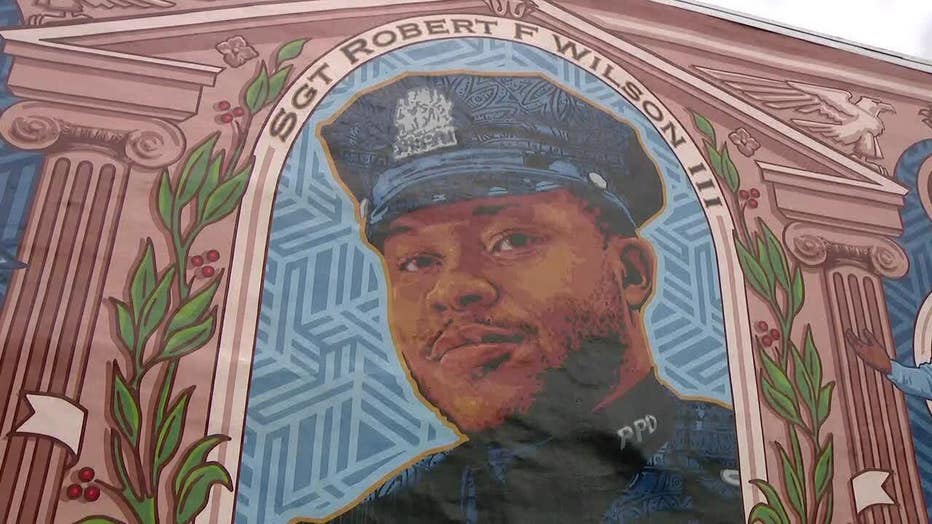 "He was more than just a cop,” Sen. Williams said. “He was a of member of this community, who died trying his best to honor the pledge he took to protect and serve. The defacing of his mural is despicable."

The mural was dedicated in 2017 and pained by artist David McShane. Shortly after the vandalism, McShane restored the mural himself.

The Philadelphia Fraternal Order of Police is now offering an $11,000 reward for information leading to an arrest.

Philadelphia Police Commissioner Danielle Outlaw took to Twitter over the weekend and described the vandalism "abhorrent" and called officers like Wilson "heroes."

"Some folks might think that this was an outsider who had no idea what they were doing, or didn't put any thought into what they were doing, or didn't even think about who the person was on this mural – I disagree with that. I think it was intentional," Outlaw said Tuesday. "I think it was blatant disrespect and it was intentional."

Outlaw went on to again denounce the act as "cowardly."

"It's obvious to me that the type of person capable of vandalizing a memorial to a hero, a hero like Rob, under the cover of night, no less, is the exact opposite of everything Rob stood for," she added.

Senator Anthony Williams speaks out and denounces the person who vandalized the Sgt. Robert Wilson mural in West Philadelphia.

In 2015, Sgt. Wilson stopped by a GameStop to buy a gift for his son when he found himself in the middle of an attempted armed robbery. He protected civilians while investigators say two suspects opened fire, killing him.

Sgt. Wilson was posthumously awarded the highest honor in law enforcement by President Barrack Obama in 2016. The Medal of Valor recognizes exceptional courage to save human lives in the face of personal risk.

This marks the second time in a little over a year that a mural dedicated to Sgt. Wilson was defaced with graffiti. Last summer the Fraternal Order of Police put forth a $32,500 reward for anyone with information leading to an arrest of suspected vandals.