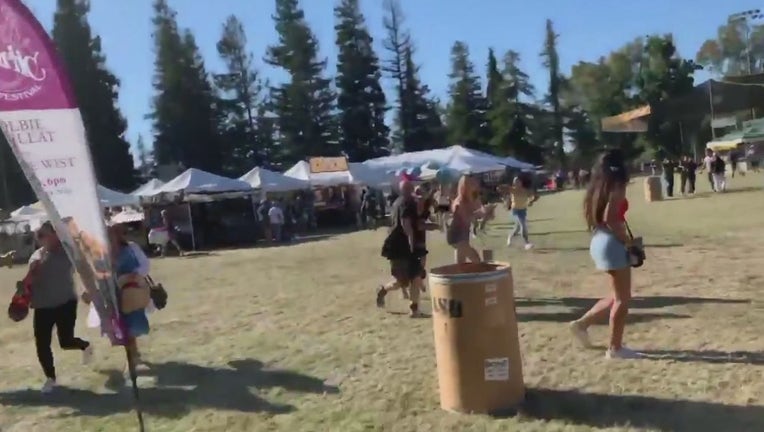 People run from a shooter at the Gilroy Garlic Festival, where a gunman killed three people. July 28, 2019

GILROY, Calif. - An annual family-friendly event featuring food and music turned deadly on Sunday during the final day of the Gilroy Garlic Festival, when a 19-year-old gunman cut a hole in the fence of the outdoor arena and walked in with a rifle, killing three people and injuring another 19.

Here’s a breakdown of what we know:

The victims: Smithee said those killed include a 6-year-old boy, a 13-year-old girl and a man in his 20s. "Any loss of life is a tragedy," Smithee said, but when it includes “young people it’s even worse.”

The Santa Clara County Coroner identified the 6-year-old boy as Stephen Romero, and San Jose City Councilwoman Maya Esparza said he was her cousin. On Facebook, she wrote: "Heartache and prayers for my cousins who were wounded yesterday and losing my little cousin, only 6 years old. And I’m angry, so angry. This violence has to stop. How do some people have such little regard for life."

The young boy attended the festival with his mother, while his father and 9-year-old sister had stayed home in San Jose. “They said that they shot my son and (the paramedics) took him from her,” Romero told the Mercury News. “I couldn’t believe what was happening, that what she was saying was a lie, maybe I was dreaming.”

The elder Romero added that his son was shot in the stomach and hand. He said he was receiving updates on his son and at one point was told Stephen was in critical condition. But “five minutes later,” he was told his son died.

Other Romero relatives were injured as well. Bob Mann, owner of South County Hyundai of Gilroy, set up a GoFundMe account for the boy's family.  A family friend set up another GoFundMe to help his family as well.

The coroner identified the girl as Keyla Salazar, 13, of San Jose.

And Amy Storey, president of Keuka College near Rochester, New York, identified the third victim as Trevor Irby, a biology major who graduated in 2017. The college said that he was with alumna Sarah Turner, who was with him when the shooting took place. "We are shocked that this latest episode of senseless gun violence resulted in the loss of one of our recent graduates—graduates in whom we place so much hope because of their potential to create a brighter tomorrow," Storey wrote in a statement.

A total of 19 other were injured -- the youngest is 12 and the oldest is 69. Earlier reports put the number of injured at 12.

Santa Clara Valley Medical Center spokeswoman Joy Alexiou said between her hospital and St. Louise, there were 11 gunshot victims and 9 others who were injured, but not by gunfire.

On Monday, Alexiou said VMC still was caring for five patients: one is in critical condition, one is in serious condition and one is in fair condition. The two remaining patients asked their conditions not be released to the public. A family member of 12-year-old Lesley Andres told KTVU that her sister was shot in the leg.

According to witness Candace Marquez, her boss at Honey Ladies was shot in the calf and her boss’s husband was shot three times. It's unclear if they are patients at VMC. A representative from the company didn't immediately respond for comment.

The gunman: Gilroy police identified the gunman as Santino William Legan, 19, of Gilroy. According to a records search, Legan has no criminal history in Santa Clara County. ATF agents were searching his home on Monday, which is located about a mile from the police department. Dispatchers described him wearing camouflage and emerging from a creek just before the shooting. Witnesses said he was wearing khaki shorts and a green vest.

The weapon: Smithee said that Legan legally bought an SKS AK-47-type rifle on July 9 in Nevada.

Motive: No official motive has been given. Craig Fair, assistant special agent in charge at the San Francisco FBI office, said they are trying to figure out if Legan had any ideological philosophies.

An Instagram account created four days ago, and which is now unavailable, made reference to the festival and read: "Read Might is Right by Ragnar Redbeard. Why overcrowd towns and pave more open space to make room for hordes of mestizos and Silicon Valley white tw**s?" A mestizo is a person of mixed descent, commonly white and Hispanic or white and American Indian. "Right is Might," first published in the late 1800's, has been described as a white supremacist text that promotes anarchy while vilifying Christianity.

At the news conference, Smithee said that the shooting appeared to be “random.” He also dialed back earlier comments that there may be a second suspect. On Monday, he told reporters that “we just don’t know.”

Smithee said that since the festival draws so many people each year – up to 100,000 – that a mini-police station was already stationed inside the outdoor area. He said that three officers “engaged” upon the shooter within a minute, killing him on site. “Despite the fact that they were outgunned,” Smithee said, the officers killed the gunman “very quickly.”

Witnesses: Witnesses described a scene of chaos and “pandemonium.” Most thought the gunfire was fireworks at first. Smithee said that many vendors still have their trucks and tents up inside the festival site, but they are not allowed to retrieve it. H e said that the crime scene is much more expansive than law enforcement thought. “It’s going to be a very complicated and prolonged process for us,” Smithee said.

President Trump: Trump addressed the shooting Monday in Washington, D.C.  "While families were spending time together at a local festival, a wicked murderer opened fire and killed three innocent civilians, including a young child," he said. "We grieve for their families, we ask God to comfort them with overflowing mercy and grace, praying for those recovering in the hospital."

Counseling and vigils: Crisis counselors are at Christopher High School at 850 Day Road in Gilroy on Monday until 5 p.m.  A bilingual vigil is being held Monday at 7 p.m. at St. Mary's Parish, 11 First St., Gilroy.

The festival: The Gilroy Garlic Festival has been held every year since 1979 on the full weekend in July at Christmas Hill Park. It’s one the country's most famous food festivals, located about 30 miles southeast of San Jose, Gilroy is home to about 60,000 people, and the city is a major producer of garlic. The festival is Gilroy’s top fundraiser, staffed with volunteers to raise money for nonprofit groups including clubs and schools.