LOS ANGELES - Multi-platinum rock band Third Eye Blind had never canceled a tour, even when its members “all had salmonella poisoning and we were all green and vomiting,” as bandleader Stephan Jenkins put it.

But the rockers have been forced to do the unthinkable Thursday due to the rapidly growing coronavirus, which first forced musicians to cancel and postpone tour dates in Asia and Europe, and has now hit the U.S. in a major way.

“In the 22 years since I’ve been doing this, I’ve never had a tour begin at the announcement of a global pandemic,” Jenkins said in a phone interview with The Associated Press on Wednesday, the day Third Eye Blind was set to kick off its latest U.S. tour in Seattle, a solo show they called off before postponing the entire tour. “We don’t miss gigs. We don’t take sick days.”

“Once you’re on a tour like this, you’re in contact with thousands of people. Then there’s airports, a lot of surfaces to touch — that doesn’t bother me. What I’m thinking about ... is the well-being of our fans, our community,” he said. “We can postpone the shows. Money is not the issue. We want to play. We don’t want to let people down. We don’t want to cancel this. I feel a moral imperative to make sure we’re doing something that’s not unsafe.”

Third Eye Blind, who released their six-times platinum self-titled debut album in 1997 and have Top 10 pop hits like “Semi-Charmed Life,” “Jumper” and “How It’s Going to Be,” watched the news closely as the virus continued to grow in different locations. After canceling Seattle, they canceled Washington, D.C., the last date on the tour. That was followed by the cancellation of Thursday’s show in Portland, Oregon, and hours later, the whole tour was officially postponed.

RELATED: Coronavirus cleaners: These products will kill COVID-19, according to the EPA

For most people, the new coronavirus causes only mild or moderate symptoms, such as fever and cough. For some, especially older adults and people with existing health problems, it can cause more severe illness, including pneumonia. The vast majority of people recover from the new virus. According to the World Health Organization, people with mild illness recover in about two weeks, while those with more severe illness may take three to six weeks to recover.

On Thursday Live Nation, AEG, CAA, WME, Paradigm and UTA said it was joining forces to form a global task force to “drive strategic support and unified direction ensuring precautionary efforts and ongoing protocol are in the best interest of artists, fans, staff, and the global community."

“At this time, we collectively recommend large scale events through the end of March be postponed," the statement read. “We continue to support that small scale events follow guidance set by their local government officials."

The announcement came hours after the Who, Cher, Blake Shelton and Dan + Shay said they would change their touring schedule because of the virus.

“Without question it’s got everyone concerned,” said Ray Waddell, president of media and conferences at Oak View Group, which owns concert trade publication Pollstar. “There’s a whole economy around touring and shows and everybody’s impacted. It starts with the artists and then spreads down to the venues and people who work at the venues, and the agents who are trying to route tours, and the managers who are trying to do the right thing for their artists — ethically and morally the right thing — and the event producers, and all the people that go — the fans.”

“All of them are sitting here wondering what to do next?”

The waves of cancellations first began in late January and February as acts such as X Ambassadors, Khalid, BTS, Green Day and Avril Lavigne canceled performances in Asia. Others, from Madonna to Queen to Maluma, backed out of scheduled performances in Europe, especially as officials put limits on public gatherings. And each day, more and more U.S. shows have been axed.

America’s most popular festival, the Coachella Valley Music and Arts Festival, was set to take place in April but has been postponed to October. The electronic dance event, Ultra Music Festival in Miami was also postponed. The South by Southwest festival, originally planned for March 13-22 in Austin, Texas, was scraped.

“The concern is not so much that a bunch of people would go to a show and get really sick. It’s that they go home and spread it around. That’s a concern for the festival business and destination festivals, where people come from all over the country, if not the world,” Waddell said.

John Cooper, of the Grammy-nominated Christian rock band Skillet, noted that a larger number of musicians are germaphobes because they are worried about getting sick and need to be healthy to perform at their best.

“I’m not one of those people in general, so I’m still shaking hands,” Cooper said. “People come up and they want to hug me. I was just walking to my hotel and somebody came up and was like, ‘Oh, can I hug you? I was like, ‘Yeah of course.’”

Skillet is performing the last several dates on their current tour, with shows in New York and Virginia taking place this week. Despite the spread of the virus, Cooper said he and his bandmates are still holding meet-and-greets with concertgoers.

“We meet about 100 fans a day and shake hands or hug or whatever. ...If I tell people they can't hug me or shake my hand, I’ll feel guilty all night. I love the people more than I’m afraid of this virus,” he said.

While more and more acts cut shows, some are still on the road. Breakthrough singer Billie Eilish, who won five Grammy Awards in January, launched her Where Do We Go? World Tour in Miami on Monday, and is planned to play shows in Philadelphia and Washington, D.C., in the next week.

Eilish is also scheduled to play at Madison Square Garden on Sunday, but that show will be canceled or postponed since New York Gov. Andrew Cuomo said Thursday the state would ban all gatherings with 500 or more people to battle the coronavirus.

NYC venues like (Le) Poisson Rouge and Sony Hall have promised visitors that they have taken housekeeping measures such as installing hand-sanitizing stations in public areas or making sure that glassware and dishes are hot-water sanitized after each use. 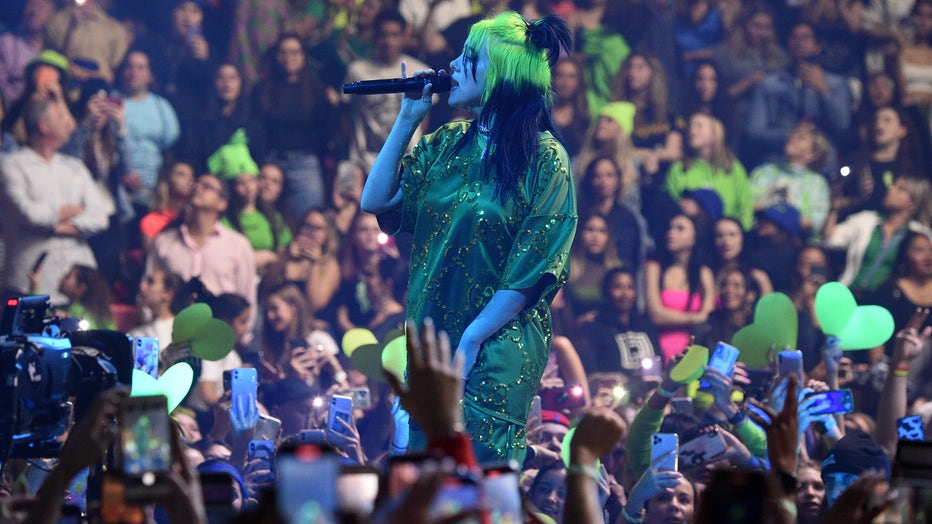 FILE - Billie Eilish performs live on stage at Billie Eilish "Where Do We Go?" World Tour Kick Off - Miami at American Airlines Arena on March 09, 2020 in Miami, Florida.

Pollstar’s Waddell said that people are going to concerts more than ever and the live performance industry is flourishing.

“We’re in a golden era for touring around the world. There used to be only a handful of artists that could tour globally (but) because of digital music and streaming, artists can be popular all over the world virtually out of the gate. ...It’s unfortunate that a wrench gets thrown into that scenario, which has been so positive for touring artists at a time when touring revenue is the most important part of a career,” he said.

RELATED: Flight change fee waivers, cancellations: This is how major airlines are reacting to COVID-19

While the coronavirus has had a big impact on the concert industry, the business is now concerned about summer, which is packed with big tours and festivals that puts tons of cash in artist and city pockets.

“The biggest conversation we’ve been having has been if something doesn’t change in the next couple months, June might be a whole different situation,” said Cooper of Skillet, a group that has booked a number of shows and festival dates in Europe.

“I’m here in Nashville, where in June you’ve got Bonnaroo and the CMA music fest that are worth tens of millions to the local economy,” Waddell said. “It’s a lot at stake.”