CHESTER COUNTY, Pa. - A group of Good Samaritans jumped into action to save a family as their car nearly got swept away during Tropical Storm Isaias in Chester County.

"We see this dad holding a baby a good 15 feet from the car almost being swept away. We're screaming at him. Sorry if I get emotional. I apologize," said Dan DiGregorio finding it hard to speak.

"Last night I couldn't sleep. I could still see the fear of that one kid in his eyes," said Dan.

The five men didn't know each other. Dan and David McDonald who recorded this rescue both pulled over during the height of the storm. Two other guys riding by then pulled over and as they were scrambling to figure out what to do another man came by.

"It was a miracle. Out of nowhere a gentleman who actually works for West Marlborough Township pulls up out of nowhere with a back hoe," said Dan. They piled into the bucket of the backhoe.

Dan was able to grab the toddler from the dad but quickly realizes there are three other children in the car. The dad gets two of them to the roof of the car but the last child struggles. 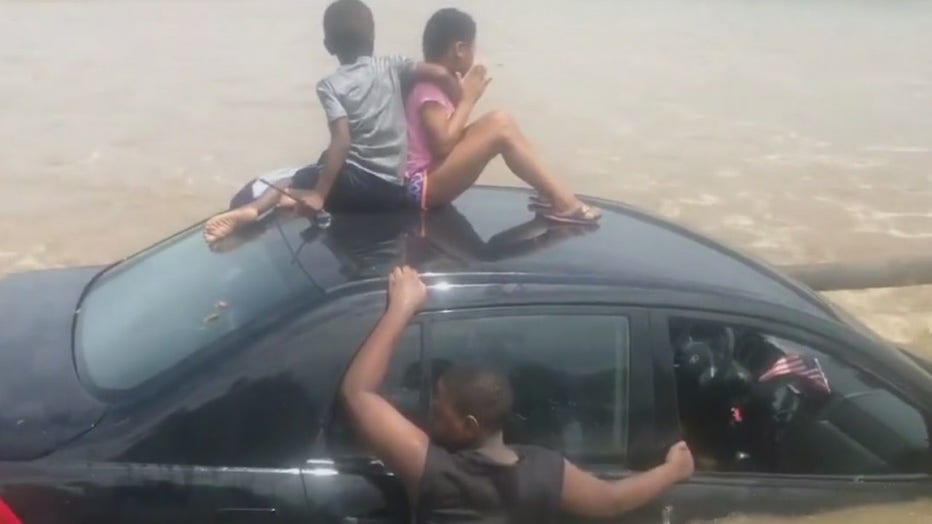 Dan says thinking back about that little boy chokes him up.

"He starts losing it. I lunge out into the water and grab him by the wrist and I'm holding on to him I can just see the fear in his eyes," he said. But with the men linking to each other like a chain they get the entire family safely into the bucket and for that reason Dan has earned the right to give a shout out.

"David McDonald was the gentleman filming. Thank you. Tom Garner he was the one right behind me holding on to my belt. Walter Puddifer he was holding on to all three of us and Bernett Wilson who works for the township,” said Dan. “It was just really cool for all of us to be one and not care who you were and just do something good," he said.

The men hope this story reaches the family. They want to check in and see how they’re doing. They didn’t get to talk much once the fire department arrived. They also hope the video serves as a reminder to people that flood waters are dangerous to drive through. They say even what they did was dangerous but they wanted to help.