James Harden, the 10-time All-Star guard acquired by the Philadelphia 76ers at the trade deadline, made his Wells Fargo Center debut on Wednesday.

PHILADELPHIA - Much like his bushy beard, James Harden is starting to grow on the 76ers.

Harden had a packed house in a frenzy from the moment he was introduced as "making his Philadelphia home debut," then flashed his MVP-form with 26 points, nine assists and nine rebounds to lead the 76ers to a 123-108 win over the New York Knicks on Wednesday night.

But the night belonged to the Beard.

The Sixers moved to 3-0 with Harden in the lineup and his dynamic duo hookup with Embiid has suddenly stamped the Sixers as legitimate contenders in the Eastern Conference.

Harden needed time to warm up to the new digs. His first points came with 5:32 left in the first quarter on, naturally, an and-1 conversion. He followed that with, yup, his step-back 3 to give him five fast points.

There was much more to showcase.

Sixers fans flocked to the Wells Fargo Center on Wednesday excited for the Philadelphia debut of James Harden.

He scored 13 points in the second quarter and had fans shooting video on their phones and waving cutouts of his head as they were going wild in the crowd.

Harden expected his debut would be "turnt" and was it ever; Philly’s hype for the new arrival rivaled the anticipated first games over the last 25 years of Terrell Owens (Eagles) and Bryce Harper (Phillies). The Wells Fargo Center was jammed with 21,333 fans and tickets for a top seat -- not far off from rapper Meek Mill’s courtside view -- were sold for thousands on the secondary market.

Even director M. Night Shyamalan attended for the city’s biggest happening on the sports scene.

The masks came off -- and the beards went on. With Philadelphia dropping the indoor mask mandate, Sixers fans had faces clear to buy the $5 fake beards in team merchandise stores. The Sixers seemingly could have paid Harden’s salary on the amount of his gear sold alone before tipoff. Fans packed the stores and stands and picked up the new No. 1 jerseys, socks and T-shirts emblazoned with Harden’s image.

Even Franklin, the mascot, wore oversized whiskers on his, well, blue whiskers. 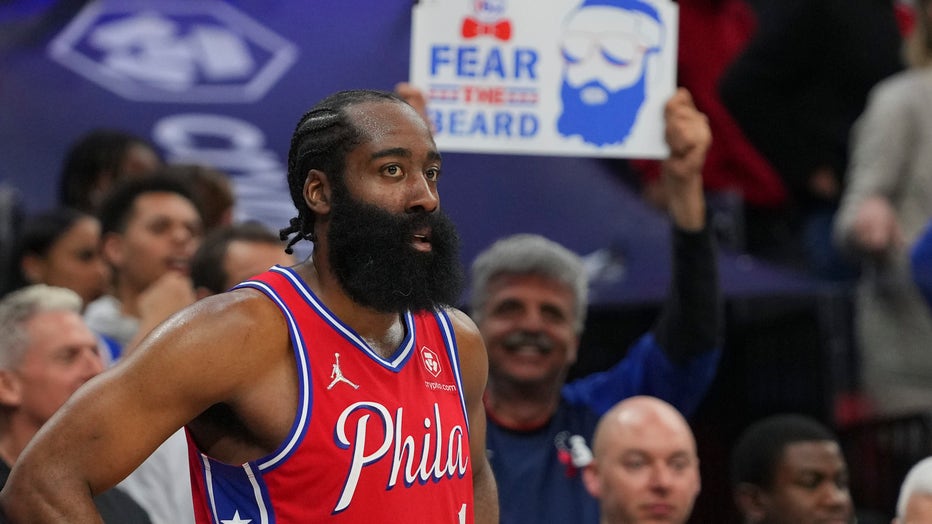 PHILADELPHIA, PA - MARCH 02: James Harden #1 of the Philadelphia 76ers looks on against the New York Knicks in the second half at the Wells Fargo Center on March 2, 2022 in Philadelphia, Pennsylvania. The 76ers defeated the Knicks 123-108. NOTE TO US

Sixers fans wore his jersey as they hanged over the tunnel to the locker room and waited for Harden to run out onto the court. With about an hour left in warmups, Harden emerged to a big ovation. He shot 3s and joked with coaches and teammates, oblivious to the expectations ahead.

Sixers coach Doc Rivers has built winners with Hall of Famers and All-Stars on his roster and understands the need to shut out the frenzy that followed Harden’s debut.

"I do the same job, the same work. It’s just that more people notice," he said before the game. "I think when you get a guy like James and Joel together with what we have, with all of our other guys, our guys sense it, too. Not the hoopla, though. It’s that they have a real shot. You don’t get many of these."

The Knicks, losers of 13 of 15 games, led at halftime and kept the lead early in the third. Embiid twice hit 3s that brought the Sixers within one. Then Philly got going. Maxey scored 11 points in the quarter and the Sixers outscored the Knicks 38-19 to finally grab the lead for good. Embiid, Maxey and even Georges Niang each hit two 3s in the quarter.

76ers: Harden hit two 3-pointers. Ben Simmons, the All-Star he was traded from Brooklyn for, made five total in his four-year 76ers’ career.

The 76ers celebrated the 60th anniversary of Wilt Chamberlain’s 100-point game. On March 2, 1962, at the Hershey Sports Arena, Chamberlain shot 36 of 63 from the floor and an un-Wilt-like 28 of 32 from the free throw line. He played all 48 minutes in the Philadelphia Warriors’ 169-147 win over the Knicks. Members of Chamberlain’s family helped ring the pregame bell.

Stateside Vodka, a Philly-based vodka company, had offered $25 gift cards as part of a trade-in for old Simmons jerseys. The company said Wednesday it received 352 jerseys that were donated to shelters in Brooklyn.

Knicks: Open a six-game road trip -- though the final game is in Brooklyn -- on Friday in Phoenix.