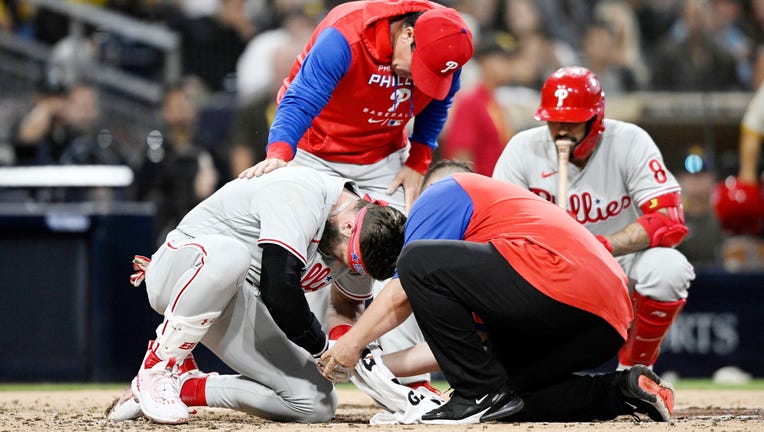 SAN DIEGO, CA - JUNE 25: Bryce Harper #3 of the Philadelphia Phillies is looked at after being hit with a pitch during the fourth inning of a baseball game against the San Diego Padres June 25, 2022 at Petco Park in San Diego, California. (Photo by D

PHILADELPHIA - Bryce Harper has three pins in his left thumb, a cast on his left hand and an unyielding belief that he will return from injury this season to try and lead the Phillies to their first playoff appearance in 11 years.

With those three words, Harper injected genuine expectations in the franchise and the fan base that the reigning NL MVP will play again at some point this season — and with a hope the Phillies are still in the wild-card hunt when he returns.

Harper declined to put a timetable on when he could he return to the lineup as the feared designated hitter in the middle of the order that led the team on a summer surge and put Philadelphia in the thick of a real pennant race.

"I don’t want to give anybody a timetable because I don’t know," Harper said. "If I knew a specific date that I’d be back, I’d tell you. I just don’t think it’s fair to anybody. I’ll be back when I’m ready to go."

Harper was injured last month when he was hit by a 97 mph pitch from San Diego Padres left-hander Blake Snell. Harper had pins inserted last week and will need them in the thumb for at least another three weeks. He is in a cast and unable to throw or do much of a workout.

"I don’t want to hope or think about anything," Harper said. "I just want to go day by day and be back when I can, whenever I feel healthy, whenever that is to help this team win. Granted, if we’re out of it, I’m going to come back and play no matter what, just so I know that I can go out there and play the game. I don’t want that to be my last day playing this year. No matter what the outcome, I'm going to come back and I'll be playing."

The 29-year-old Harper, who signed a $330 million, 13-year deal with the Phillies in 2019, is hitting .318 with 15 home runs, 48 RBIs and a .985 OPS. Harper talked Tuesday before the Phillies were set to open a three-game set against Harper's former team, the Washington Nationals.

Philadelphia is 4-3 in Harper’s absence and entered Tuesday only one game back of the final NL wild-card spot.

Harper had already surrendered his spot in right field earlier this season because of because of a small tear in the ulnar collateral ligament of his throwing elbow. He last played the field at Miami on April 16. Harper did not have a scheduled checkup on the elbow last week because of the surgery but he said it could happen in another two weeks.

Harper said he did not expect to travel with the Phillies — who have the longest playoff drought in the National League — on an upcoming nine-game road trip that opens Friday in St. Louis and included stops in Toronto and against the Marlins.

"I don't really feel the need for me to go anywhere, especially with appointments for the next two weeks with the doctors," he said. "If I didn't have those appointments, I'd be going on this road. After the break, I'll be kind of a little more open to going on the road and travel and get the things done I need to."