At times, it was difficult to hear the judge because he was constantly interrupted by hackers posing as media, playing rap music and yelling foul language. The interruptions got so bad, Judge Christopher Nash had to abruptly shut down the Zoom hearing after pornographic images appeared on the screen.

When the hearing resumed, Clark’s attorney argued his client's bond was excessive and asked the judge to lower it, with conditions.

“The court can place an ankle monitor on  you can limit where he goes," suggested David Weisbrod.

But Hillsborough assistant state prosecutor Darrell Dirks said Clark's bond should stay high. He argued the teenager is a danger to the community, especially if he has access to any electronic devices without proper supervision. 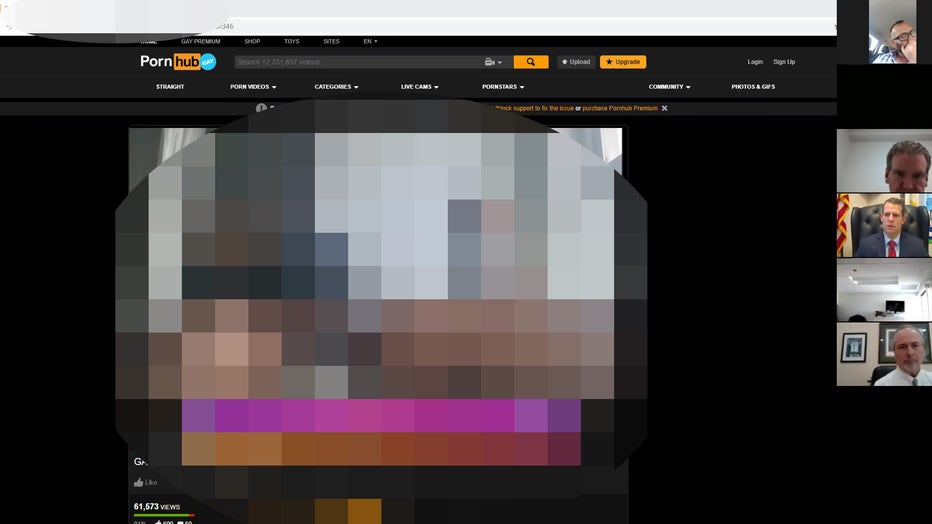 A screenshot from the online hearing shows a user sharing a pornographic video (blurred by FOX) as legitimate participants (right) pause for the interruption.

The 17-year old is accused of hacking the Twitter accounts of major companies and famous people, like Bill Gates, former president Barak Obama, and Apple. They say he and two others did it in an effort to scam users out of Bitcoin.

Investigators say the trio would urge followers to donate funds with a false promise to double the donation. In all, investigators say he stole $117,000 in virtual currency.

While Judge Nash kept Clark’s bond at $725,000, he did grant the defense’s request to allow Clark to use his personal funds to post bond.

Prosecutors say Clark has $3 million in Bitcoin and they argued it is dirty money connected to his alleged crimes.

However, Weisbrod said the funds are legitimate. They were seized by law enforcement and later retuned after authorities decided not to prosecute during an earlier investigation.

Clark has pleaded not guilty to 30 criminal charges that include communication fraud and fraudulent use of personal information. His next court date is scheduled for October 7.