Earlier this week, Mayor Kenney stated that he would not declare a citywide emergency, despite the continuing calls to do just that.

PHILADELPHIA - Philadelphia officials are continuing to call on Philadelphia Mayor Jim Kenney to declare a citywide gun violence emergency as the number of homicides in 2021 continues to climb.

City Controller Rebecca Rhynhart and Councilmember Jamie Gautier issued a call for further action from the mayor's office in a letter sent Thursday.

"Philadelphia is being held hostage by gun violence," the letter begins as they state that nearly 1,300 Philadelphians have been shot and 309 have been murdered, as of July 21.

"If nothing changes, the city is on pace to eclipse more than 550 homicides in 2021 – a devastating record high," the letter reads.

Earlier this week, Mayor Kenney stated that he would not declare a citywide emergency, despite the continuing calls to do just that.

"For us to hit this tragic milestone mid-year is simply heartbreaking and unacceptable," Kenney said of reaching more than 300 homicides in 2021. "It's a clear indicator that this is a health crisis of epic proportions."

The mayor added that he has called the rising violence a "public health emergency," and that his administration has been working on "evidence-based interventions to stem the tide of violence."

"Our administration is working with urgency but what I won't do is allow for the fact-based work to be overridden by the political expediency sought by some," Kenney said Wednesday. "That is why I do not believe that a local emergency declaration will have any benefit for Philadelphia."

Rhynhart and Gautier said in their letter that they could not let Kenney's letter 'be the end of the conversation.'

"The gun violence epidemic gripping our city is claiming too many lives for us to remain quiet," they wrote.

Their letter goes on to point out the 14 zip codes where violence in Philadelphia has been concentrated.

They then stated their belief that a comprehensive response must include eight objectives, including increased programming at recreation centers, additional mental health services, financial investments in workforce development, and the formation of a gun violence emergency response team.

IRhynhart and Gautier requested a response to their letter, including a detailed plan and timeline for their eight objectives to be implemented, by Friday, July 30.

"While we have found you to be defensive, calling appropriate criticism ‘political grandstanding,’ and dismissive of the ideas and work of countless stakeholders, we hope that you take the above recommendations into consideration. More than anything, our goal is to stop the bloodshed in our neighborhoods. It is with that intention that we mapped out these specific action steps and requests for information," the letter concludes.

A spokesperson for the Mayor's Office issued the following statement upon receiving the letter:

"The Mayor is glad to hear the Councilmember is not focused on semantics, and that the recommendations she’s presented are closely aligned to the work the Administration is already undertaking to continue our response to the national public health emergency that gun violence presents. The Mayor looks forward to continuing to work with colleagues on City Council to continue to respond to this crisis." 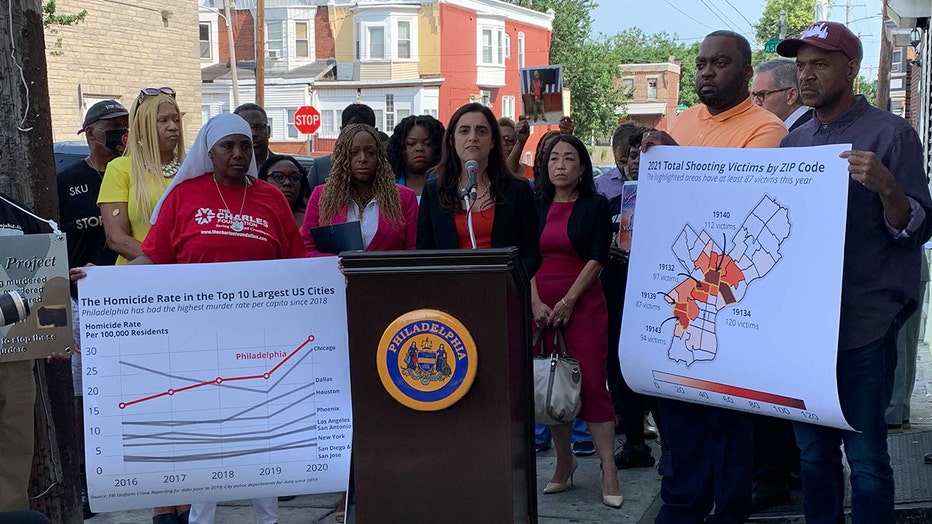