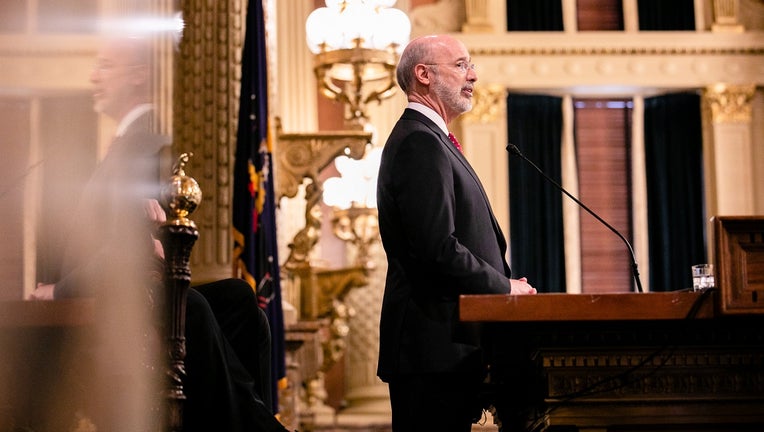 — Increases spending through the state’s main bank account to $36.1 billion. Including nearly $600 million for the current fiscal year, Wolf is seeking authorization for another $2.6 billion in new spending, or 7.6% of this year’s enacted budget of $34 billion.

— Projects a 4.5% increase in tax collections to $37.3 billion, before refunds. Does not increase tax rates on sales or income, the state’s two biggest sources of revenue.

— Asks lawmakers to expand a bond-funded redevelopment grant program by $1 billion and make the money available for the cleanup of lead, asbestos and other environmental health hazards in school buildings.

— Calls for lawmakers to raise the state minimum wage to $12 an hour on July 1, up from the federal minimum of $7.25 an hour.

— CORPORATE INCOME TAXES: Restructures how the state would calculate corporate profits to adopt “combined reporting” and reduces the current 9.99% tax rate by annual steps to 5.99% in 2025. The change is estimated to produce an additional $240 million in revenue in 2020-21.

— STATE POLICE FEE: To help fund the state police budget, imposes a fee on each municipality that would be driven by incidents and coverage area, and weighted by population, income and whether a municipality has its own full-time or part-time police force. The administration estimates the fee would produce $136 million.

— MUNICIPAL WASTE: Imposes an increase of $1 per ton on municipal waste hauling to generate $22.6 million for the Hazardous Sites Cleanup Fund, which is projected to be out of money at the end of 2020.

— GAS DRILLING: Seeks approval of a tax on Marcellus Shale natural gas production to underwrite a $4.5 billion “Restore Pennsylvania” infrastructure program. Using estimates of 2019 production and a price of below $3, the tax would yield more than $600 million in a year.

— Delays a $377 million payment to providers for long-term programs for the elderly.